Who was James Millikin? 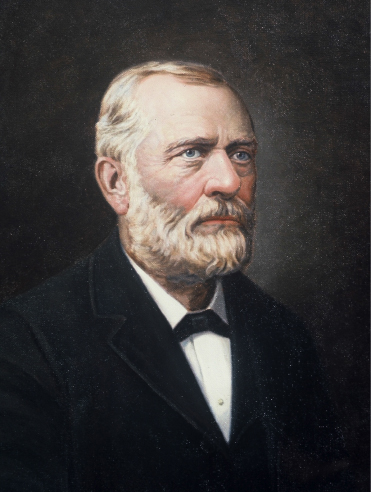 James Millikin was born in Ten Mile, Washington County, Pennsylvania, August 2, 1827, according to Dr. Albert Reynolds Taylor's research, which found considerable uncertainty as to exact dates. He was the son of Abel and Nancy (Van Dyke) Millikin, a moderately wealthy farmer in Western Pennsylvania. His grandfather came from Ireland as a Scotch-Irish Presbyterian in 1771. His mother was of Dutch origin, whose ancestors came to America in the seventeenth century. James Millikin would later name Van Dyke Street in northwest Decatur in her honor around 1880.

Little is really known about his childhood. As a farm boy, James helped drive herds of steers to New York City. In the fall of 1846, he matriculated in Washington College (now Washington and Jefferson College), Washington, Pennsylvania. It was while attending Washington that he made the vow to found an institution of learning, if ever he were able, to fit youth for occupations.

The lure of the west called James, and in 1849 he accompanied his father on a sheep drive into Indiana and again in 1850 to Danville, Illinois. During the winter of 1850, he was at Wabash College, although records are unclear as to what he studied, or how long. Returning to Pennsylvania in 1851 for more sheep, he again drove them to Danville with a partner named McFarland.

During the 1850's, James continued to increase his flocks and herds. He rented many farms for grazing and was called "the cattle king of the Prairie State." He also started purchasing real estate, most of it from public domain.

In 1856, James Millikin arrived in Decatur, where he continued in his livestock and real estate dealings. On January 1, 1857, he married Anna Bernice Aston, daughter of the Rev. Samuel M. Aston, pastor of the Cumberland Presbyterian Church in Mount Zion since 1855. Mr. Aston was pastor of the Presbyterian Church in Ten Mile, Pennsylvania, when James was in his early teens, and Anna and her sister Nancy had been educated in Washington Female Seminary in Washington.

James Millikin entered the banking business in 1860, placing his board J. Millikin & Co. in front of the building that was formerly home to the Railroad Bank, which had recently failed. He gradually reduced his livestock holdings and devoted his interests to real estate and banking, with some investments into local industry. He assisted in the organization of the Union Iron Works, serving as its president, as well as the Decatur Coal Company. His bank became the largest banking institution in Illinois outside of Chicago. In 1897, he reorganized his bank as the Millikin National Bank of Decatur.

He served on various boards in the city, including as member of the Board of Supervisors and as an Alderman. While he ran for State Senator, a distrust of banks that was prominent in the Middle West defeated him.

In 1876, he built a house at Pine and West Main Streets in Decatur. Following the founding of the university, Mr. Millikin continued in his banking business until his death on March 2, 1909 in Orlando, Florida.

Mrs. Millikin died on July 29, 1913. To the city of Decatur she left her early benefaction, the Anna B. Millikin Home for aged women, which had been organized in 1879 as the Girls' Industrial School of Old Ladies' Home. In her will, she bequeathed her home and lot to be the home of the Decatur Art Institute, owned by the university and managed jointly by the university and the citizens of Decatur. She had participated in the selection of the university colors and served as chairman of the Women's Hall section of the Building Committee after July 7, 1908. Faculty committee and the Board of Managers would later name this dormitory Aston Hall for her family. The Millikins died without issue, besides the philanthropic gifts to the city of Decatur.

What James Millikin envisioned when he founded Millikin University in 1901 was unique: a university that would embrace the "practical" side of learning along with the "literary and classical;" and, while affiliated with the Presbyterian Church, it would not be narrowly "sectarian" and would remain open to all.

The result is one of the nation's first small, comprehensive universities that, a century later, has three professional schools and one for the liberal arts and sciences; a well-rounded university where programs in classical music vie in excellence with those in accounting and the health sciences.

Apply to MU and begin your path toward success!