James Millikin University’s first academic year began on September 15, 1903. Almost nine months later, on Tuesday morning, June 7, 1904, its first three graduates walked across the stage of what is now Albert Taylor Theatre (then called Assembly Hall) to collect the first Millikin degrees. Later that evening, students and faculty joined in a celebratory reception held for the graduates. In the week leading up to commencement, other celebrations included a reception for the graduates held at President and Mrs. Taylor’s home, a recital of the College of Music, the play “She Stoops to Conquer,” a baccalaureate sermon by the Rev. Ira Landrith, a farewell meeting and devotional exercises of the Y.M.C.A. and Y.W.C.A., a track meet, and a baseball game. 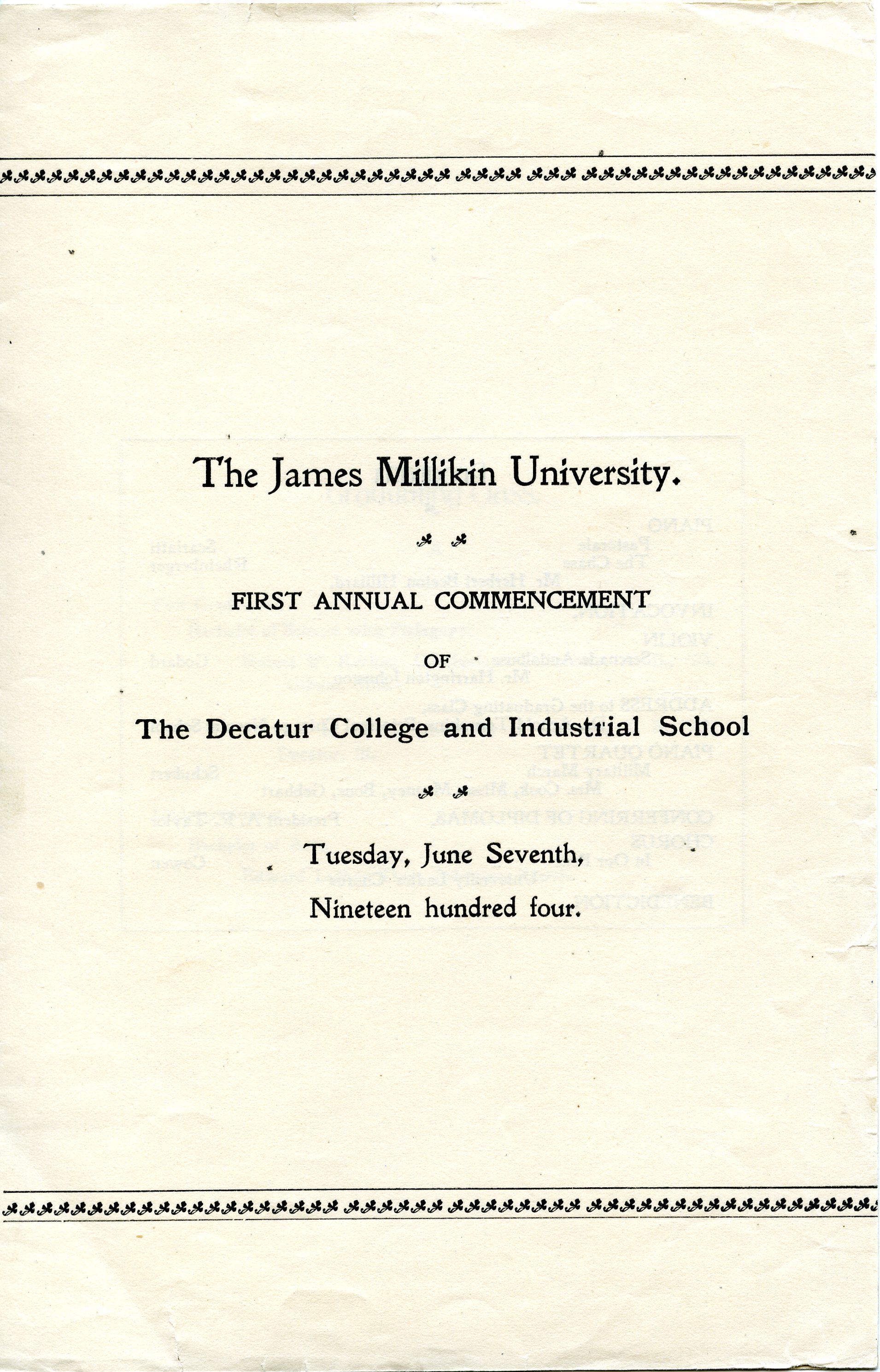 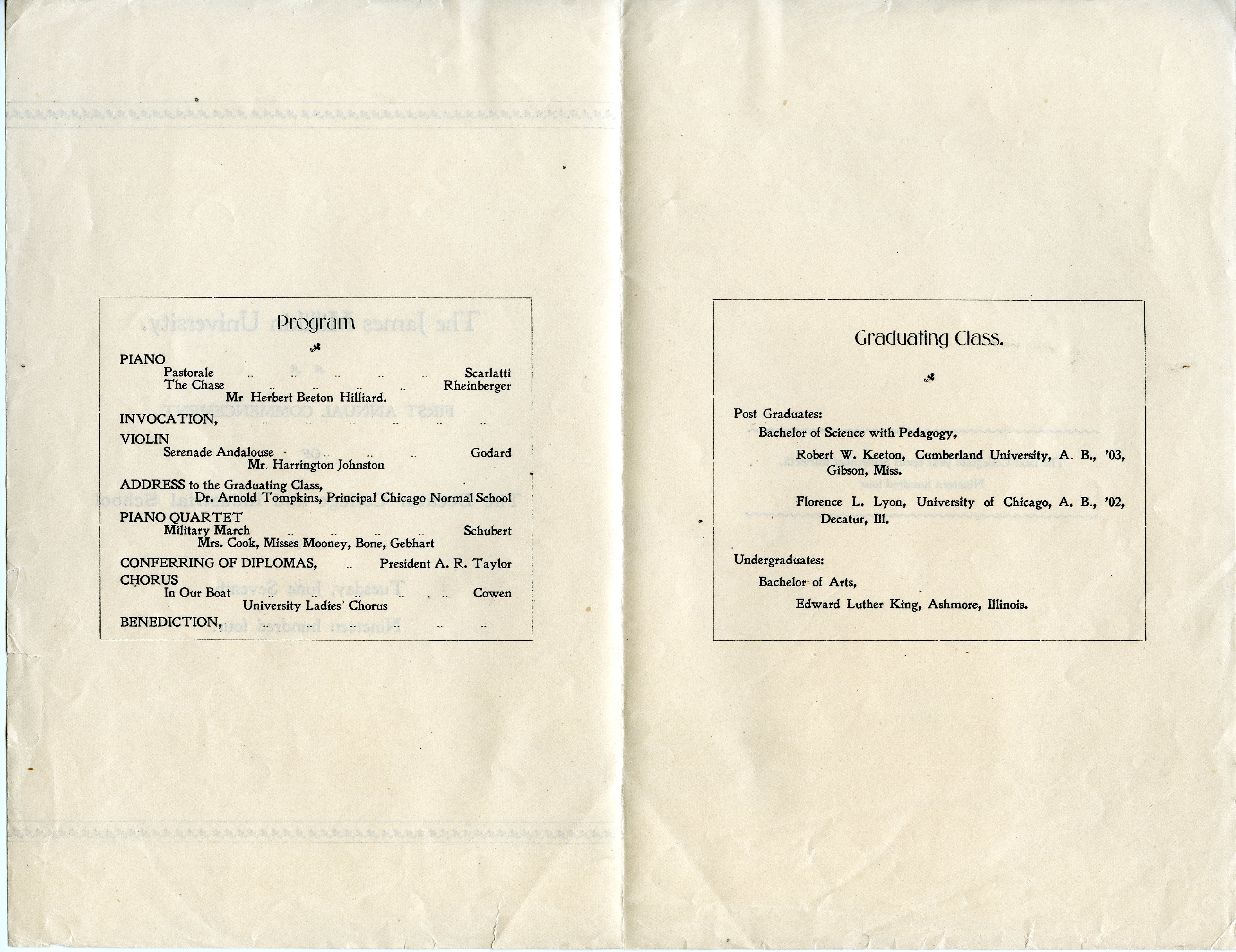 The Decatur Herald made note of Millikin’s first graduation ceremony on page 2 of its June 8, 1904 issue.

A transfer from Lincoln College in Lincoln, Illinois, King entered Millikin as a senior, and graduated in 1904 with a B.A. Because the other two 1904 graduates (Keeton and Lyons) already had undergraduate degrees, King was considered to be a senior class of one. He was a founding member and the first president of both the Philomathean literary society and the Millikin chapter of the Y.M.C.A., and played football for Millikin’s first football team. King stayed on at Millikin as a fellow in the math department during the 1904-1905 academic year, and graduated again in 1905 with a B.S. with Pedagogy. In 1905, he became principal of the high school in Virden, Illinois, and later went on to teach in Alton, Illinois. 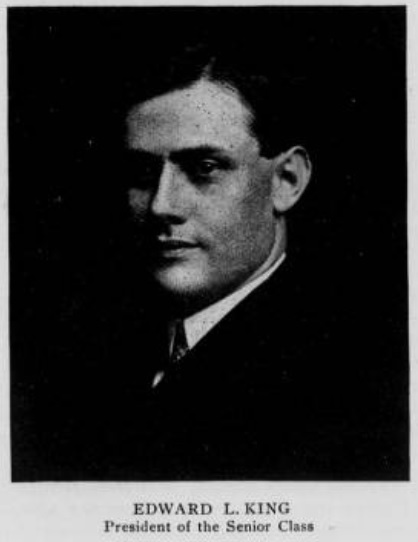 The June, 1904 issue of The Decaturian (Millikin’s student newspaper) describes Millikin’s week of commencement celebrations, and includes a photo of Edward L. King, president of a senior class of which he was the sole student.

Keeton was a 1903 A.B. graduate of Cumberland University and earned a B.S. with Pedagogy from Millikin in 1904. He assisted as a fellow in the biology department while earning his degree and was the quarterback of Millikin’s first football team. He stayed for another year, serving as an instructor in the biology department and continuing on the football team. He later became a medical doctor, and came back to Decatur several times in the 1930s to lecture to local physicians on his work on metabolism and diabetes mellitus. He served as the head of the internal medicine department at the University of Illinois from 1934-1951. 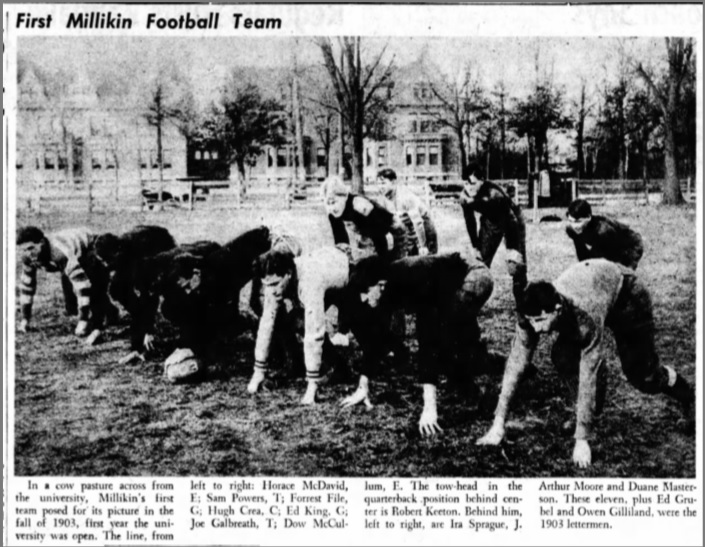 Millikin’s first football team included two of the school’s first graduates. The blonde in the center of the photo, acting as quarterback, is Robert Keeton. The student in the white sweater in front of him is Edward (Ed) King. (Above photo from Decatur Herald, September 19, 1952.) 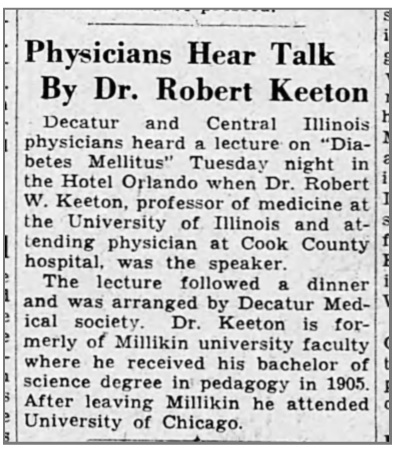 In 1934, the Decatur Daily Review reported that Dr. Robert Keeton gave a lecture on diabetes mellitus to local physicians at the Hotel Orlando. The year of his Millikin degree is listed, incorrectly, as 1905, rather than 1904. (Above article from the DDR, April 25, 1934.)

Millikin’s first “hometown” graduate, Lyon was an A.B. 1902 graduate of the University of Chicago and assisted as a fellow in the English department in 1903-1904. Like Keeton, she graduated from Millikin with a B.S. with Pedagogy. In 1904-1905, she served as an instructor in Millikin’s English and modern languages department. Lyon was the daughter of George S. Lyon, founder of Decatur’s Lyon Lumber Company, and later taught in both North and South Dakota and in Oregon. She died of cancer in Portland, Oregon in 1918, and is buried in Greenwood Cemetery in Decatur. 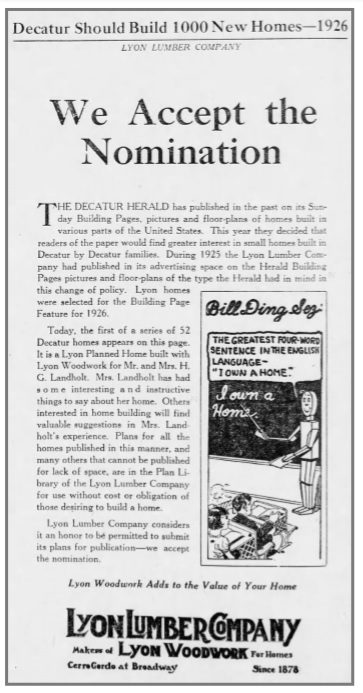 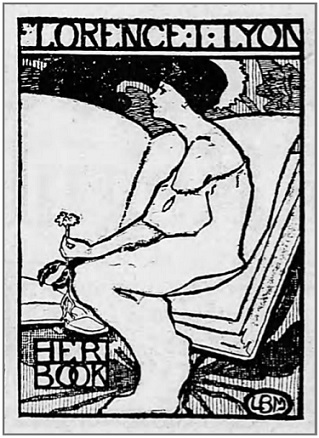 In 1915, the Decatur Herald published reproductions of a collection of book plates designed by former Decatur resident Beulah Mitchell Clute. This design, showing “a maiden with a Grecian figure contour, sitting pensively on the edge of a huge open book holding a flower (the artist’s play on the name of the owner) in one hand,” was created for Florence L. Lyon. (Image from the Decatur Herald, May 23, 1915.) 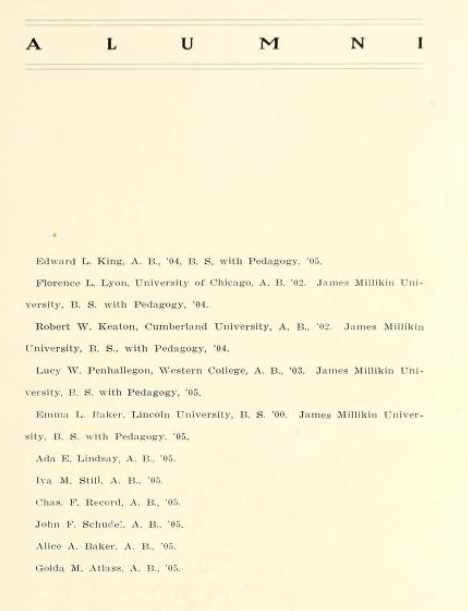 The first Millidek (Millikin University yearbook), was not published until 1906, after two Millikin graduations had already taken place. Here, King, Keeton, and Lyon are listed as alumni on page 31. There are no corresponding photos.