Virtual reality (VR) is quickly growing into one of the more popular technologies on the market and it's already making a difference in how we see things as well as how we communicate with audiences.

This semester, Millikin University business students have created a virtual reality version of an art gallery inspired by Millikin's Perkinson Gallery as part of a class project. The class, titled Application Integration, is led by Ed Weber, clinical instructor of information systems, and it was the students who wanted to create a program for their final project using virtual reality.

The virtual version of the art gallery contains a room and interactivity created by the class. Another key part of the project is the 3-D aspect; in order for the gallery to have an exhibit the students have to scan pieces of artwork to have placed within the program. 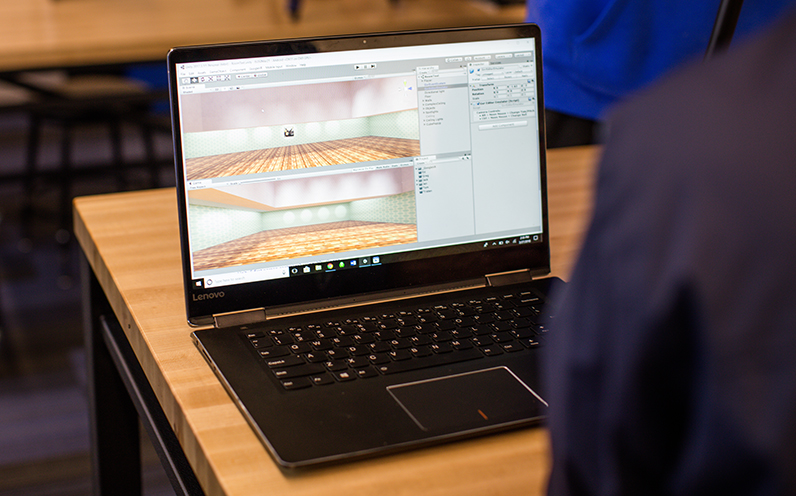 "Say a parent can't come and see their child's artwork when it's physically there at the gallery, they can go online and walk around the room on their computer and look at the art pieces," said Emola. "That requires us to take a picture of the artwork, and we want to make it easy to update in the future, so we created an Excel spreadsheet for people to provide names of the artwork and authors."

The Unity application offers a platform to create 2-D, 3-D, VR, and augmented reality (AR) games and apps. The Unity graphics engine and editor also provides the opportunity to deliver content to any media or device, such as PCs, mobile devices and home entertainment systems.

Jack Morgan, a senior information systems major from Manteno, Ill., worked on creating the art gallery space which included a skylight and spotlights that project onto the walls to show the artwork.

"We added the ability to provide text when you scroll over the image so that you can see who the author is, the meaning behind it, and the title of the piece," said Morgan. 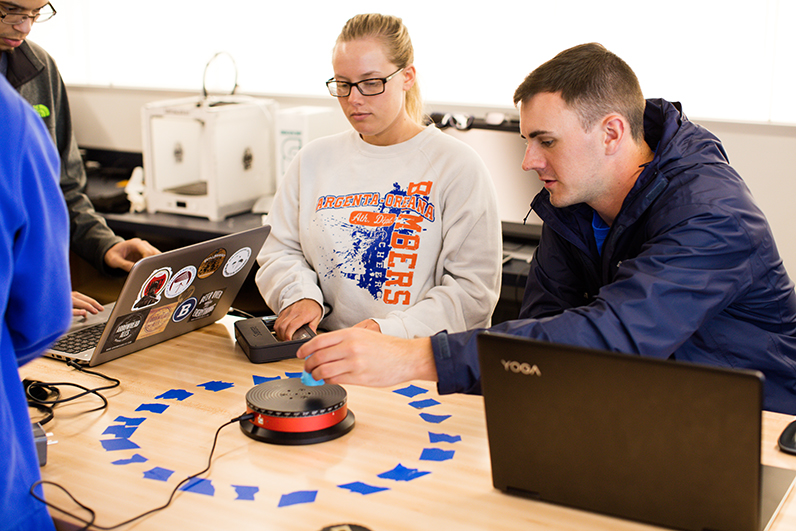 The students are building the gallery so that it has the ability to be seen on a website or through a virtual reality headset providing 3-D effects. The point is to offer both features side-by-side so that the gallery can be seen on a VR device or non-VR device.

Tristen Schum, a senior accounting major from Decatur, Ill., focused on getting the physical text data of the gallery into the program. 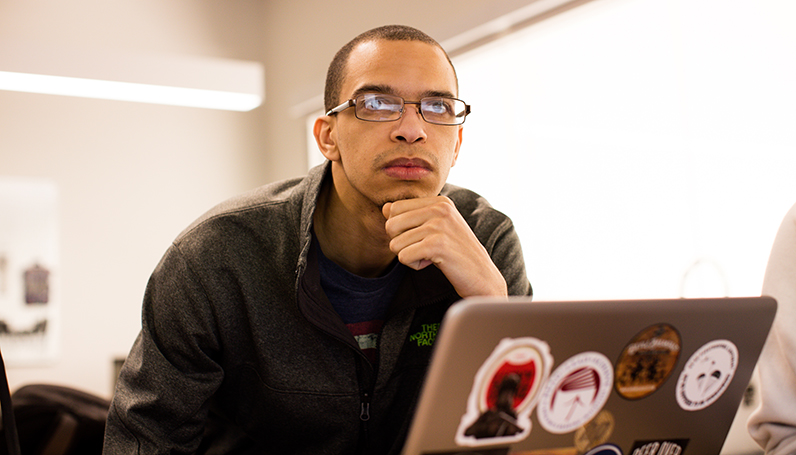 "We're trying to get the program to know what kind of artwork has to go onto the walls and where the artwork needs to go," said Schum. "A lot of what we do is working with hard-coded portions to import the data as well as add dynamic parts to the gallery, like pop-ups."

Ed Weber added, "In the future, when the second version of the gallery is developed, rather than code it, we can provide spreadsheets to students that describe how to feed the room and it will repopulate itself with all the right objects in the right spots. It becomes a self-maintaining environment." 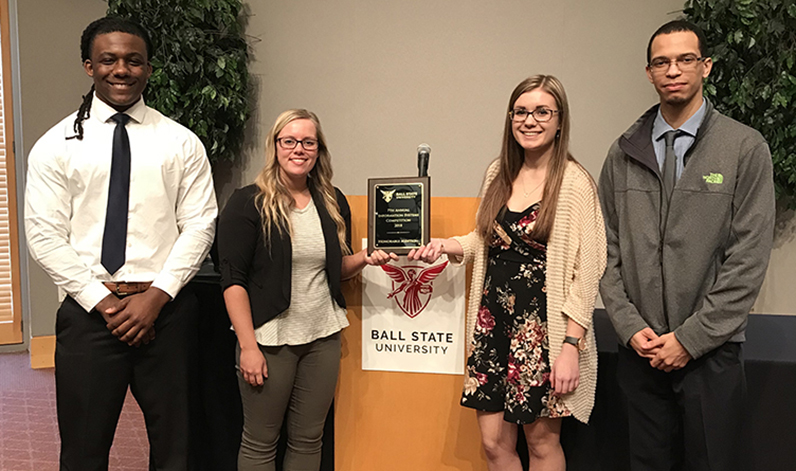 "The students were living examples of Performance Learning at its best and were complimented by both the competition judges as well as the other faculty advisors from other universities," said Weber. "One judge informed us that the written project submission from the virtual reality team was one of the best project write-ups that he had ever seen in his years of judging the competition." 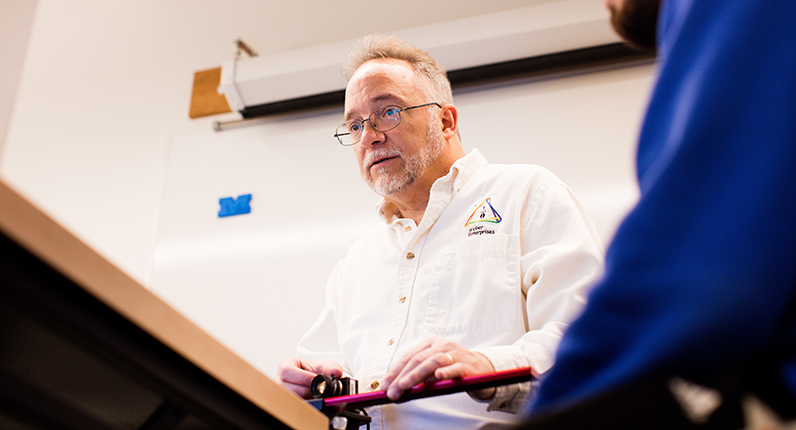 Virtual reality is now being seen as a potential business solution where programmers can learn how to create whatever they need to from a business perspective.

In terms of the future, Weber says the VR project could extend beyond Perkinson Gallery to possibly Blue Connection (Millikin's student-run art gallery), or it could become a Millikin-branded solution that could turn into a student-run venture. "It has lots of long-term application," said Weber. "It can also be a generic room that someone can use as their virtual portfolio." 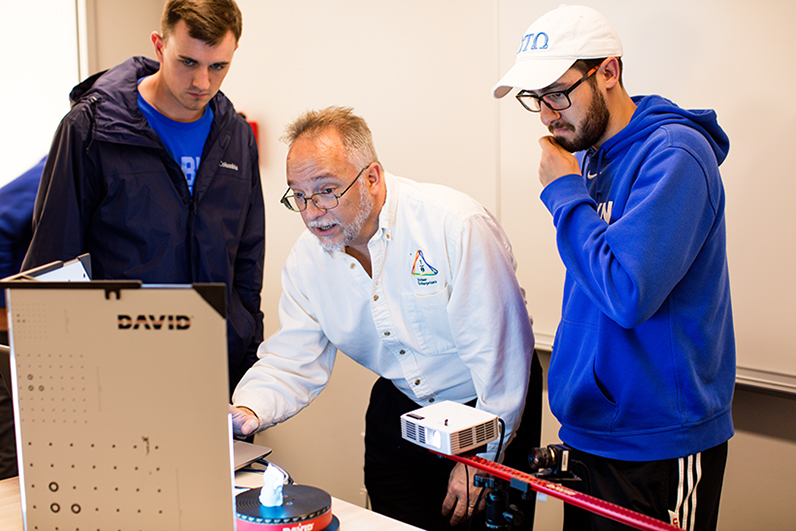