How can students conquer procrastination? How can a strip of fabric organize cables and style hair? How can a person get all the peanut butter out of a jar without mess or waste? These are the types of problems being solved by Millikin University's Tabor School of Business students in the Innovation Lab class taught by Dr. Jane Hua, assistant professor of entrepreneurship.

Through a partnership between downtown Decatur's Thinkwell Makerspace Industries and Millikin's Center for Entrepreneurship, these students are learning about the entire process of how to create a product for consumers. From brainstorming a product idea and designing prototypes to actually fabricating their inventions, gathering customer feedback and studying market trends, Innovation Lab students are getting a close-up view of an important and often overlooked area of entrepreneurship. 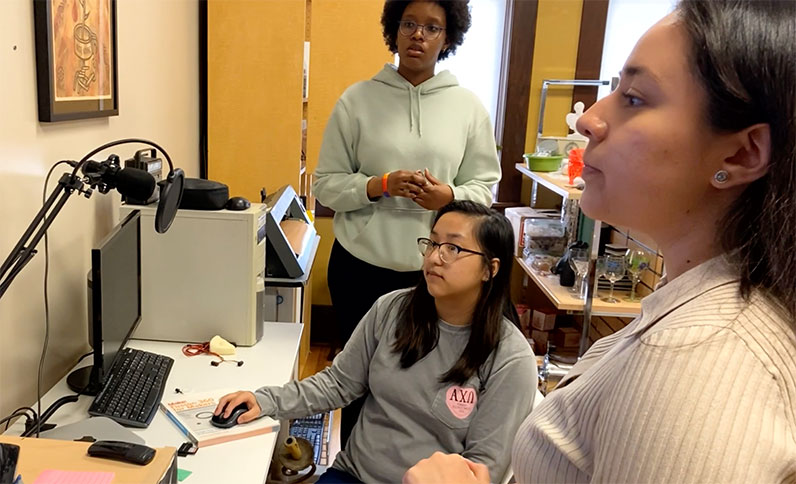 "This class is for those who want to start a business because they have an invention," Dr. Hua explained. She emphasized that the Innovation Lab was a crucial component of Millikin's hands-on approach to education, Performance Learning. While Dr. Hua handles the classroom lectures and discussions for the class, the hands-on portion of Innovation Lab is overseen by Jesse Blunt, president and CEO of Thinkwell Makerspace Industries in their downtown Makerspace location.

"A makerspace is an open-source, open-plan workspace, and the goal is to give people access to tools and technology," Blunt explained.

Innovation Lab students have access to the rapid prototyping technology inside the space, including computer-aided design (CAD) software and 3D printers, as well as Blunt's extensive knowledge of creation, fabrication and innovation. "I bring the technical expertise and the actual fabrication methods. We explore how to bring ideas from a nebulous design phase into practical, tangible prototypes," Blunt said.

For the class's main project, students were encouraged to create products that would be useful to consumers and solve problems. Jelle Berkhout, an entrepreneurship major from the Netherlands who is studying abroad at Millikin for a semester, said that he was the "idea man" for his team's product, called "Racleen," which aims to create a new way to remove spreads like jams and jellies out of a jar.

"It's a problem I've been facing. I have to stick my knife all the way to the bottom of the jar. It's not an efficient process and you end up with a mess and wasting food," Berkhout explained.

While the Racleen team does not yet have a working prototype for their product, they have gotten positive feedback from potential consumers about the idea.

Another team was further along in the process, having already created a working prototype, received feedback from customers and were now beginning market research efforts to determine their product name, price point and optimal sales platform. After presenting her team's progress, Brigid Duesterhaus, a senior entrepreneurship major, was using her class time to research possible competitors on Etsy, an e-commerce company focused on handmade products and crafted items. "The end goal is to have a final prototype that they can take to an online platform to sell, or to speak with potential suppliers and manufacturers and see what they would need to mass produce and commercialize the product," Dr. Hua said.

The students involved in the Innovation Lab described the experience as being much different from other business courses they've taken. Jake Vietti, a senior business entrepreneurship major and member of the Racleen team, mentioned that developing a product was an entirely new experience for him. "Usually I develop services, so I was excited to take on something new and develop something innovative." Vietti also said that he was fine-tuning CAD skills that he hadn't used since high school and applying his business knowledge to the product his team is engineering.

Initially, the Innovation Lab class was developed to fill a need in the entrepreneurship curriculum, which lacked a course specifically for students with an invention they intended to commercialize. Dr. Hua said her primary goal in teaching the class was to integrate a design thinking framework with Performance Learning principles to maximize what students were learning.

Dr. Hua mentioned that she hoped the students would gain a variety of skills in the Innovation Lab, but she emphasized one important lesson. "What I want the students to learn is not necessarily to craft something, but to create with the design thinking mindset. How to pivot and how to consider the customer's needs first. How can they adjust their ideas based on what the customer needs?"