A Symbol of the Nursing Profession

Millikin nursing students honored at Legacy of the Lamp ceremony

A Symbol of the Nursing Profession

Millikin nursing students honored at Legacy of the Lamp ceremony

Florence Nightingale set a standard of caring for all nurses to follow. Often called "the Lady with the Lamp," Nightingale paved the way for the heroic work of nurses today. Her compassion set her apart from others as she gained her famous moniker for checking in on her patients by lamplight, often writing letters to loved ones at home on their behalf.

The "lamp" is a symbol of Florence Nightingale, exemplifying the light of learning, knowledge and caring. That symbol was used as a means of honor during the Millikin University School of Nursing's annual Legacy of the Lamp ceremony on Oct. 1 at Fairview Park in Decatur, Ill.

More than 50 nursing undergraduates and six graduates were recognized during the ceremony that took place during Millikin's 2021 Homecoming celebration. The nursing majors received a ceramic lamp as a symbol of their move into the next level of their clinical studies. 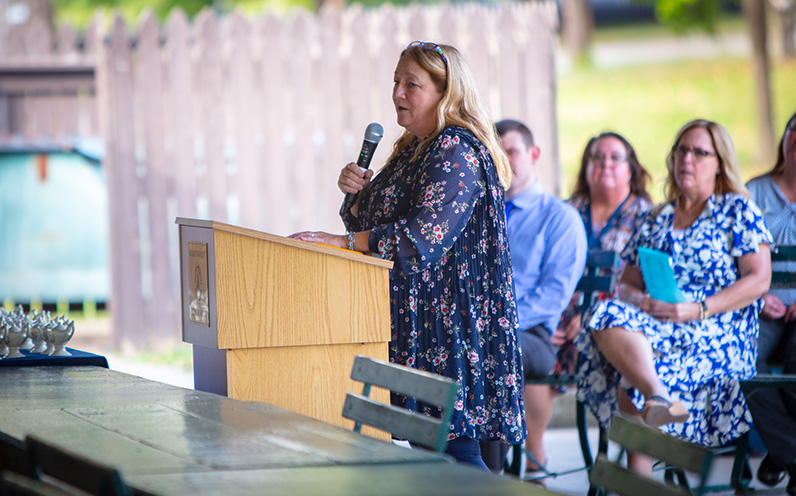 "The Legacy of the Lamp is a long-standing tradition at the Millikin School of Nursing. Although there were nurses before Nightingale, none of them galvanized the attention of the world like she did," said Dr. Wendy C. Kooken, director of the Millikin School of Nursing, as she addressed the students. "She felt a calling from God to become a nurse despite all the opposition. This sort of passion and focus is absolutely what it takes to get through this difficult course of study and to remain resilient throughout your career of nursing."

Kooken says that now more than ever, with a complicated shortage, nurses are needed. According to Kooken, there will be close to 200,000 nursing positions available through 2030. 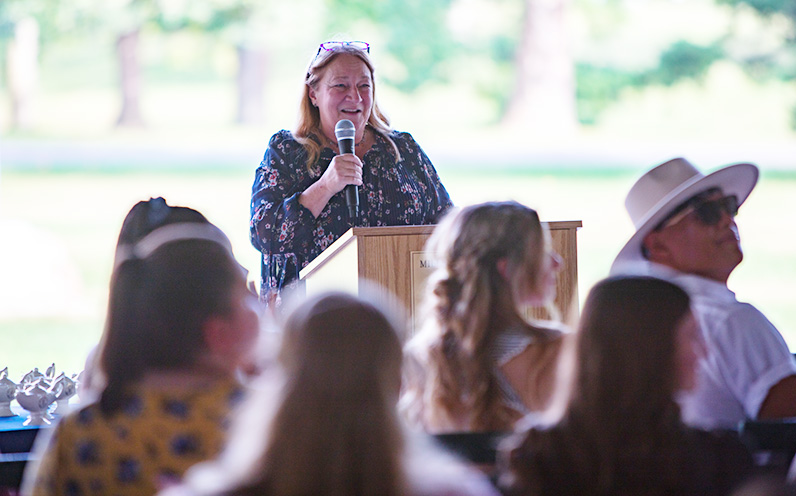 "We need you. Nursing is never an easy choice, and it never has been. Florence Nightingale saw people in their worst conditions and she also saw the reward of her vision for what healing could be," Kooken said. "It was reported that sometimes she was on her knees for eight hours during clinicals changing bandages. She was revered by her patrons because she literally saved their lives with sanitation, with vigilance, and she started evidence-based nursing with her statistical calculations that showed her methods saved lives."

Prior to receiving the lamps, Millikin nursing majors heard from 2021 Distinguished Alumnus Dr. John Blakeman, who currently serves as an assistant professor of nursing at Illinois State University. 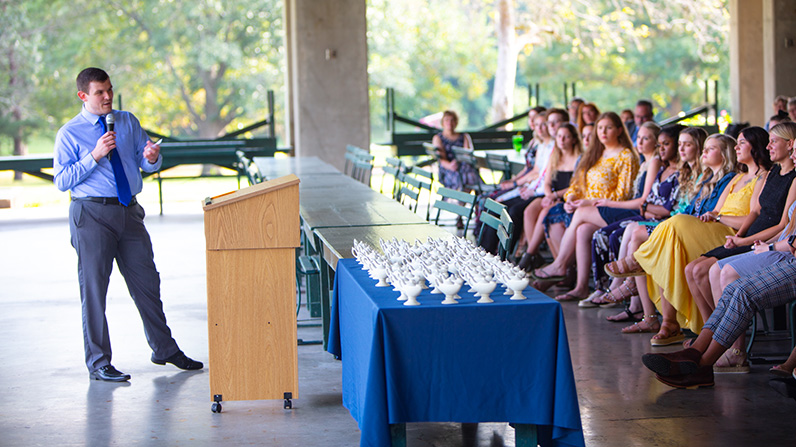 In preparing his remarks, Blakeman said he wanted to find something meaningful to share with the audience … and that was not "two hours long." He focused on "how to keep yourself going," and how to think about the long-term goals of graduating and practicing as a nurse. 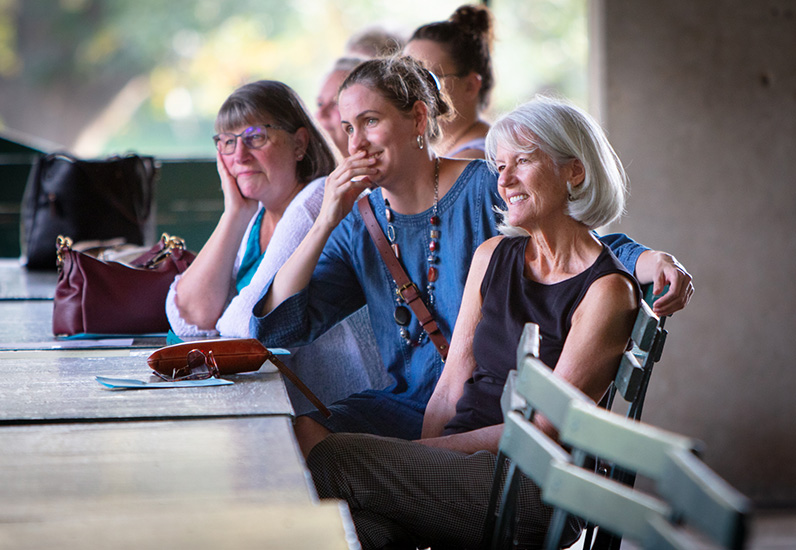 Blakeman used storytelling as a way to engage with the listeners and brought up moments with his family. About eight months ago, Blakeman's grandfather was hospitalized, and being the family nurse, Blakeman "got the call" from a nurse at the hospital. That nurse happened to be a former student of Blakeman's from three of the courses he taught. 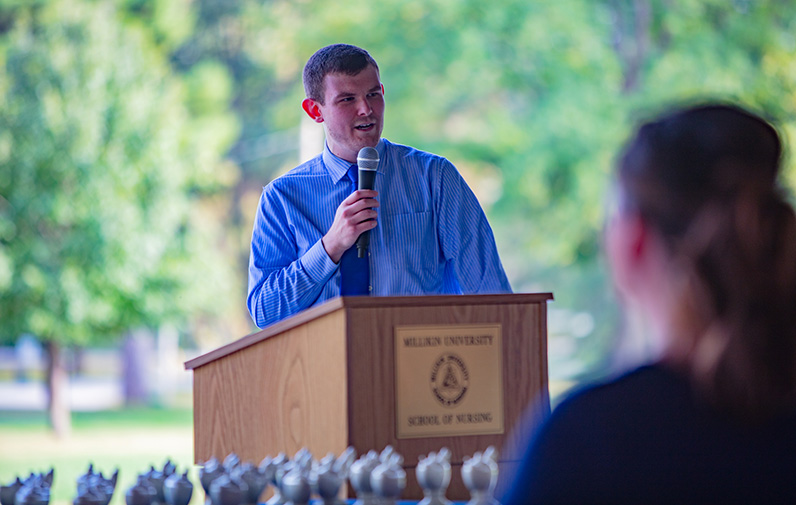 After his time at Millikin as an undergraduate student, Blakeman worked for several years in the cardiovascular and cardiothoracic surgery settings and then moved into nursing education. He has been a nurse educator for six years and was recognized in 2019 as a Nurse Educator Fellow by the Illinois Board of Higher Education. He completed his Ph.D. in Nursing at Illinois State University in 2020, receiving the university-wide Clarence W. Sorensen Distinguished Dissertation Award for his dissertation work on women's heart attack symptoms. 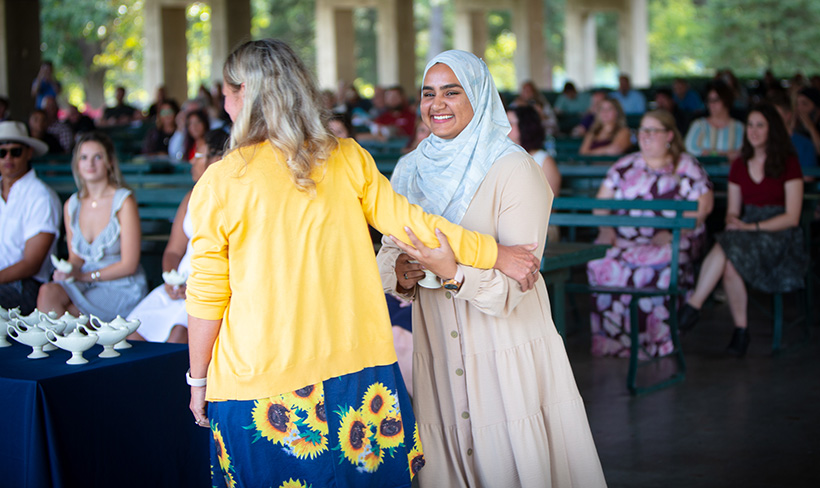 Blakeman left the audience with a question: When you become a nurse, what will that approach or attitude be? "You want to walk into that patient's room thinking that they are your family member, even though they are not, and treat them the way you want your family member, or loved one, treated," he noted.

The following nursing students were recognized at the Legacy of the Lamp ceremony: 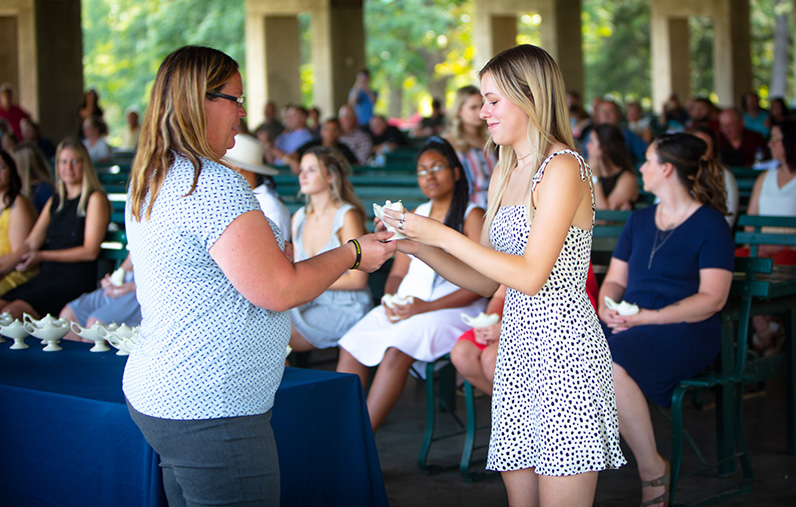 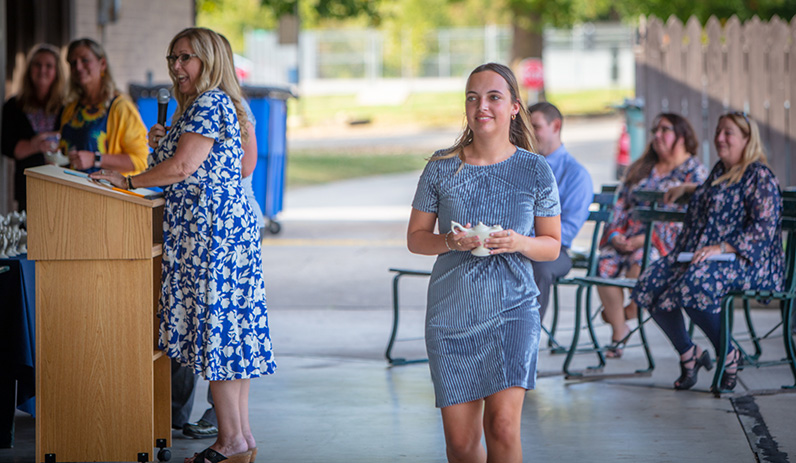