Lobbying for the Future

Lobbying for the Future

By definition, a lobbyist helps influence public opinion and the opinions of legislators as well as creating political support for certain initiatives. Millikin University graduate Nash Oldenettel is determined to take his career in this particular direction.

Before taking one step on Millikin University's campus, Oldenettel always had an interest in politics, but it was Millikin's hands-on learning approach that helped him hone his skills for the professional world.

"Just having the ability to talk to people openly and having the willingness to talk with anybody persuaded me to push into a degree where I could potentially make a future out of it," Oldenettel said.

"I also plan to pursue a master's in public administration. My hope, in 15 to 20 years, is to become a CEO of an association," Oldenettel said. 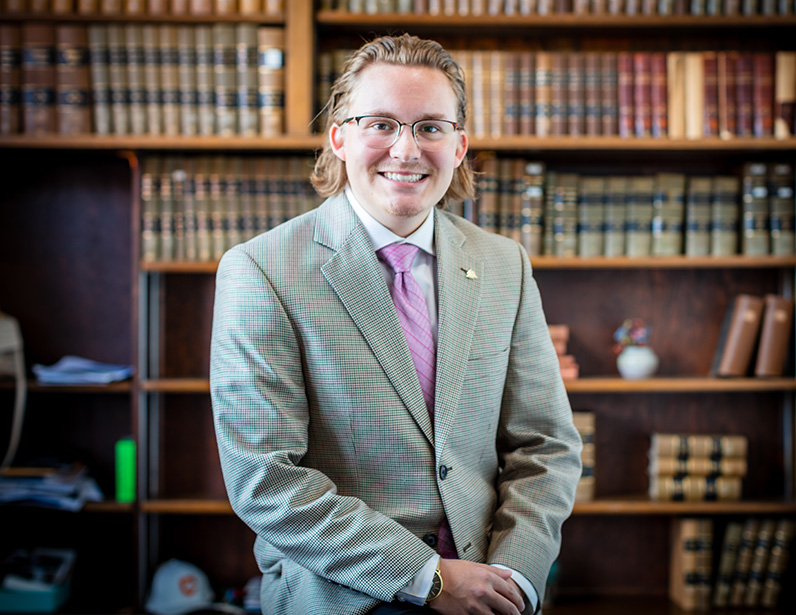 Oldenettel was involved with Millikin's Model United Nations student organization and Model Illinois Government. During his experiences with the Model Illinois Government simulation – a student-run simulation that encompasses writing and debating legislation, understanding parliamentary procedure, and running for political office – Oldenettel won the best lobbyist award in 2019 and served as the head lobbyist in 2020 and 2021 where he trained and oversaw lobbyists in the House and Senate chambers while also lobbying legislation.

"With Model United Nations I was able to be a representative for a different country and had an opportunity to learn more about international politics. As a lobbyist for Model Illinois Government, I tried to persuade representatives in the general assembly to vote certain ways for bills," he said.

Oldenettel says Millikin, as an institution, offers many activities and aspects that help students throughout their time on campus – especially the little things.

"I think one big thing that Millikin provides is the small-class environment, and by having those small class sizes you can get the attention you need and the attention you want," he noted. "It progresses your learning ability."

Oldenettel expressed the importance of broadening your horizons to help make the most of the college experience.

"It opens up more and more opportunities to not only find your niche but to develop connections for the future," he said.

Millikin University's "Family Magazine," Blue Review provides fresh and interesting perspectives from campus. From faculty and student stories to new programs and majors to achievements in our athletics and alumni communities, Blue Review has Millikin pride emblazoned across its brilliant pages. Readers will enjoy original photography, design and artwork, collaborative content developed by staff, faculty and students, and a behind-the-scenes look at the fascination and innovation powering the Millikin Momentum.

Our most recent issue covers Millikin's 97% graduate success rate and every step that students take to get there. It looks at how students have risen to the challenge of the COVID-19 pandemic and how they have grown as a result of the educational Performance Learning opportunities Millikin has helped provide. While the world paused, Millikin students continued to persevere, showing their strengths to the campus, community and employers around them.