Behind the Scenes with the Costume Designers of Millikin

Behind the Scenes with the Costume Designers of Millikin

The role of a costume designer is significant when it comes to adding to the contexts of characters on stage. It is the designer's responsibility to make sure the costume works for the actor as well as making it work for the theatre production.

Students in Millikin University's School of Theatre & Dance who are studying design and production engage in all the critical aspects of the professional theatre industry the minute they step onto campus. Professor Jana Henry Funderburk is among the many faculty members at the forefront of this Performance Learning curriculum where the work Millikin is doing is on the front edge of the wave of technology in costume design. 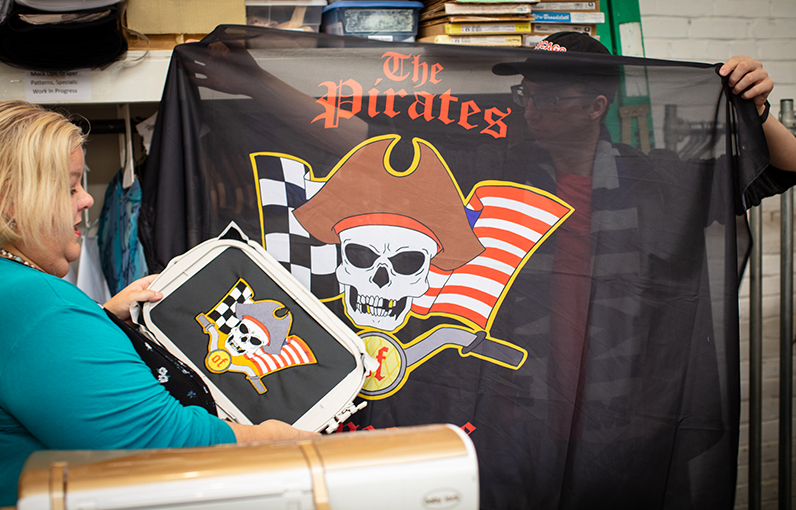 This past February, the work of Funderburk's students played an extra special role in the Millikin production of W.S. Gilbert and Arthur Sullivan's classic operetta "The Pirates of Penzance." The popular production was given a twist as the "pirates" were members of a 50s biker-gang and rebels without a cause.

Tasked with creating the costumes for the show, Funderburk and her students utilized different technologies, such as 3-D printing, to create the wardrobe, including a logo patch for the "pirates." 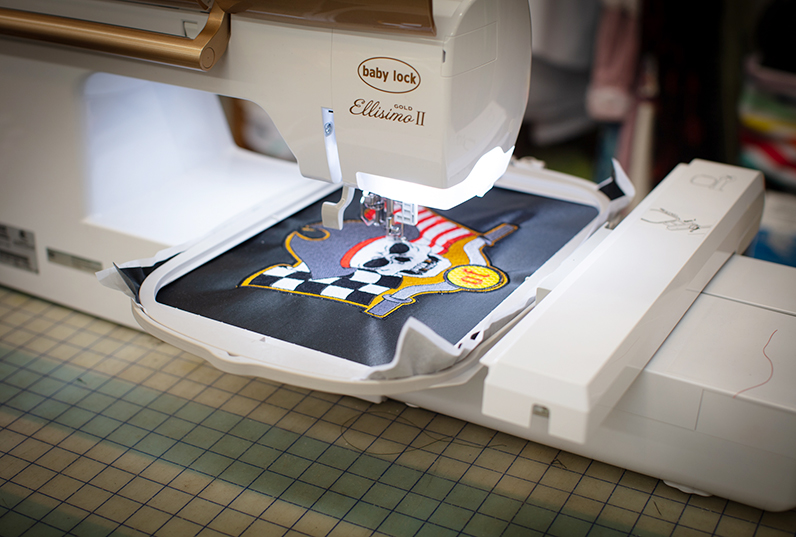 "Costumes has really been the last area in design and production to embrace technology and that's starting to change," said Funderburk. "We are at the front end of these things. People are teaching it in classes, but we are implementing it into the design, and that's the Performance Learning aspect that is so Millikin."

Student Katelynn Watkins, of Pekin, Ill., served as a costume designer for the show and it was her job to create the overall vision of what the characters would look like. Watkins designed the logo patch for the pirates which she digitally rendered on her iPad. The idea for the patch was part of her vision.

"It took me about an hour to sketch the logo and then I made a final version that was printed – it turned out to be a big part of the show," said Watkins. "I've grown so much as a designer since I started at Millikin – it's been such a great process. I've always been interested in digital drawing and I've been able to take my work to the next level." 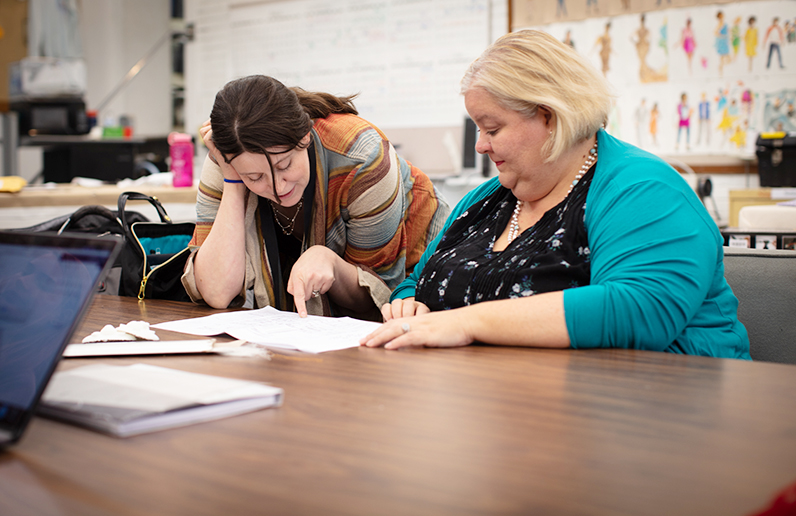 Funderburk added, "You need to empower the students to use these things and learn them now, and whatever the next project is after they graduate, they won't be afraid to try it."

Funderburk spent her sabbatical in 2019 learning more about costume design technologies such as digital cutting and 3-D printing, which helped lead to the creation of the logo patch and other original artwork for the characters in "The Pirates of Penzance."

Student Zac Cary, of Saint Charles, Mo., who also served as a designer for the production, is interested in working in theme park design after he graduates from Millikin. As a student, Funderburk describes Cary as someone who matches the "engineering with the art." 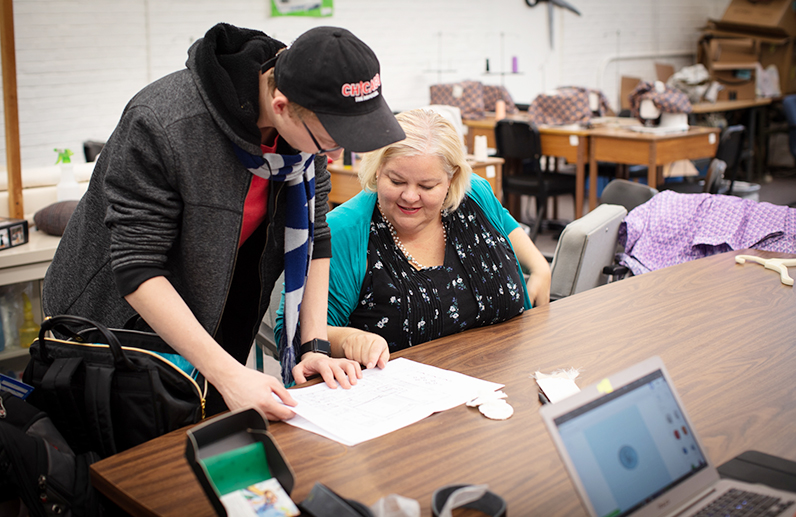 "There is such a need for people of his caliber," said Funderburk. "We have alums who are working in design production on Broadway and they have really strong ties to Millikin and the work."

Cary says his mind has always been wired as an engineer, and with theatre being one of his passions, he was driven to the technical side of things. "At Millikin, I've been given plenty of opportunities to flex that engineering muscle – I've done pyrotechnics and automation. After Millikin, ideally the dream job would be to work as an engineer for Disney doing ride systems. Working with the faculty at Millikin has given me a new lens with how I can approach a project through engineering and creativity."

Funderburk believes the amount of technology used in costume design is going to continue to grow as productions build in creativity. "We are using a database to manage our information, and as the pressure continues to grow in the amount of money spent and what the labor and material costs are, it will become important to figure out how you are managing those resources." 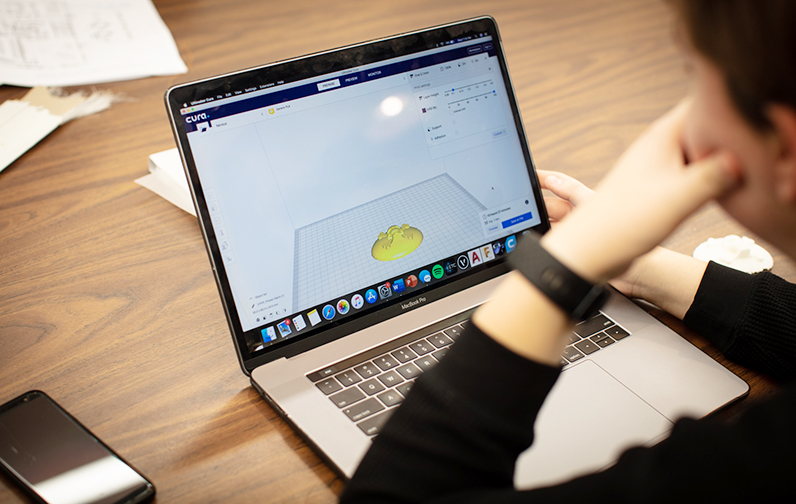 Each year when the Millikin School of Theatre & Dance decides on a mainstage season, the School finds it important to select shows that are engaging for patrons and offer challenges for performers. The School also selects shows that offer unique experiences for the design students in not just costuming but lighting, scenery, sound design and technical direction.

On the horizon for the School is the opening of the new Center for Theatre & Dance in fall 2020. The new building will feature lighting and sound labs, a costume studio, a costume classroom, collaboration spaces, and offices and support facilities for current staff with room for growth.

"Moving into a new space will offer a whole new world of opportunities for the design students, and that's very exciting," said Funderburk. "I love when students are thinking so much about their work that they're pushing the faculty to find ways to make it happen. Our students keep it fresh and you have to meet them where their interests are."