An inside look at Millikin's production of "Phantom of the Opera"

An inside look at Millikin's production of "Phantom of the Opera"

The longest running musical in Broadway came to life on the Kirkland Fine Arts Center stage at Millikin University. 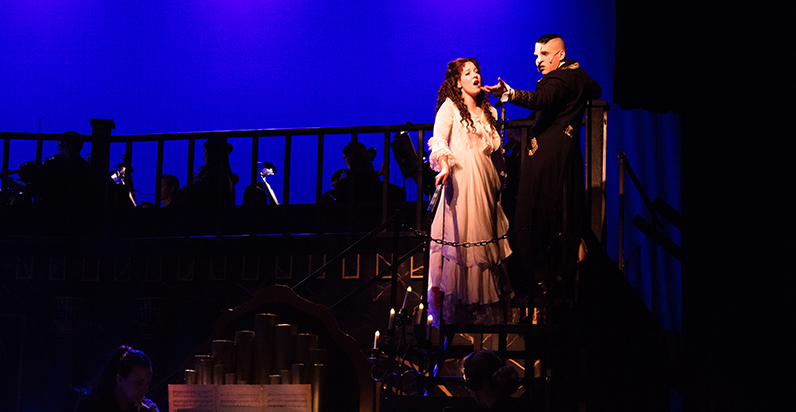 Set at the Paris Opera House in 1881, French novelist Gaston Leroux's classic tale chronicles the story of love and despair as the mysterious Phantom demonstrates the lengths to which he will go to obtain the object of his obsession, the beautiful young soprano, Christine Daae.

From the music to the actors, to the behind-the-scene happenings, Millikin provided an inside look at all three aspects to show what it's like to bring "Phantom of the Opera" to life.

Music of the Night

For the production of "Phantom," the Millikin-Decatur Symphony Orchestra (MDSO), made up of all students, accompanied the cast performing on a 9-foot platform center stage. Previous MDSO performances have had students performing beside music professors and community musicians.

Becca Husar, a sophomore commercial music major from Yorkville, Ill., plays cello in the orchestra and says her favorite part is when it all comes together to hear everyone's musical parts.

"It feels like a professional experience," said Husar. "Usually, the students don't just play with students, we usually have professionals with us, and so this is going to show the University and the people who come to see the show that the students really do have what it takes to take on a production by themselves."

Husar noted that each member of the orchestra is so driven that it makes other musicians around them want to be better players.

"Knowing that we are all passionate about the music and that we had a good understanding of what 'Phantom of the Opera' was, we learned that we could trust the person next to us," said Husar. "The energy of the show is much different than ever before because of the time we've put into the production."

Benjamin Viette, a senior human services and theatre double major from Belvidere, Ill., played the Phantom. Viette says one of the things Millikin has taught him about theatre is the ability to apply his surroundings to the environment he wants to create on stage.

"Theatre is something I can pursue, theatre is something that I can emulate at any point in my life," said Viette. "Whether or not I go off to Broadway, New York or Chicago, I know there's a point in my life that theatre will always serve me so I can serve it. Being in 'Phantom' is a very humbling experience. We treat it like any other show and we possess the ability to do it."

The character Christine was played by Sarah Obert, a freshman theatre major from Oswego, Ill. Obert says the most beautiful part of theatre is the journey of learning.

"When picking a school and a major, it's important to envision working at it," said Obert. "No matter what role you're playing, having this collaborative experience is something you can take anywhere you go. The show has everything from love, tragedy, and everything in between. It really shows in a dramatic way the human experience."

For a large performance like "Phantom," much went on behind the scenes in terms of design and production.

Wyatt Burton, a senior theatre design and production major from Decatur, Ill., was the hair, makeup artist and designer for "Phantom of the Opera." Among Burton's responsibilities was designing the makeup underneath the mask for the Phantom.

"I think design production is the largest definition of Performance Learning," said Burton. "We do two production assignments a year while possibly designing a show. The amount of time we spend on a show is immeasurable, and to see all the different processes has been incredible because everyone has so much to bring to the show."

Burton says working on "Phantom of the Opera" was unique in itself and also a challenge.

"Everyone knows what 'Phantom' is and people expect it to look a certain way," said Burton. "You have to hold up that integrity but also at the same time make it your own. All of the designers have put themselves into it while still keeping the iconic characters and images that happen."