Justin John Moniz, coordinator of vocal studies in Millikin University's School of Music, has been awarded the 2017-18 American Prize in Vocal Performance.

Moniz, who oversees the vocal area at Millikin, was named the recipient of The American Prize in Voice – Friedrich and Virginia Schorr Memorial Award in the men's professional division on Jan. 5, 2018. 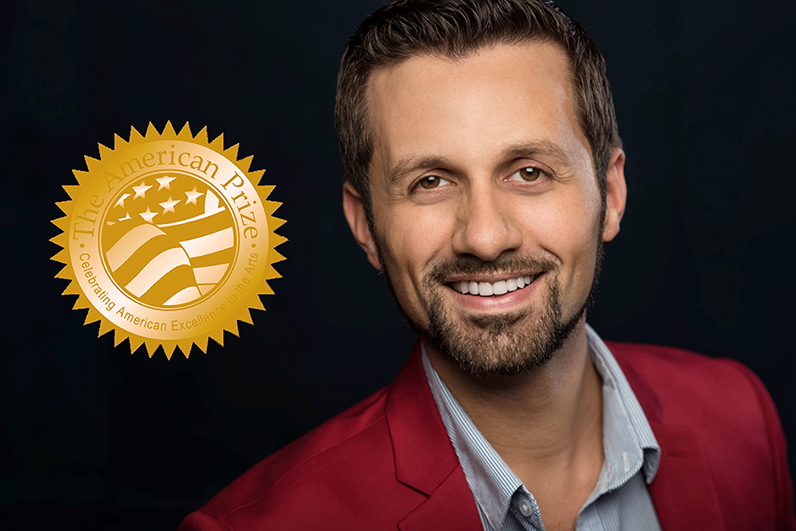 "I was pretty overwhelmed. The American Prize is awarded annually, designed to recognize and reward the best performing artists, ensembles and composers in the United States," Moniz said. "To be among such an illustrious list of finalists is, in itself, an honor."

The Prize recognizes and rewards the best performances by classically trained vocalists in America in 2017, based on submitted recordings.

Two of the musical works Moniz submitted for the award will be presented at his upcoming faculty recital at Millikin University on Sunday, Feb. 4, at 4 p.m. in Kaeuper Hall.

"I submitted 'On wenlock edge' by Ralph Vaughan Williams and 'Splenda l'alba in oriente' by G.F. Handel, both accompanied by string quartet and piano/harpsichord," Moniz said. "These two pieces are remarkable works for the voice, as each requires a great sense of flexibility on behalf of the singer — not to mention the poetic component. I am pleased to share that I will be performing both of these works in my upcoming faculty recital at Millikin alongside some wonderful colleagues."

Moniz added, "To be identified as someone who has exuded excellence within the field is quite an honor. I believe this honor reflects the totality of my singing career. Developing and cultivating ones technique is a cumulative process. I'd venture to say that the performance I offered was a culmination of years of continued study and work both on and offstage."

To be identified as someone who has exuded excellence within the field is quite an honor. I believe this honor reflects the totality of my singing career.

Winner of the 2015 American Prize in Voice – Chicago Musical Theatre Award, Moniz is celebrated for his superb high tenor and commanding stage presence, and has been thrilling audiences in opera houses, theatres and concert halls across the nation. He has had an active career in opera, concert and musical theatre, having sung over 80 roles to date.

A clinician in high demand, Moniz has been invited to present masterclasses and workshops across the United States and Asia. His students have been praised by the media for their ability to bring a veteran performer's assurance and personality to the stage and have gone on to perform on Broadway, national tours and regionally.

An active researcher of the evolving operatic canon and its effect on singer training, Moniz recently represented Millikin at the National Opera Association's National Convention in New Orleans in early January.

"While in New Orleans, I had the privilege to present my research, 'The Changing Face of Opera in America: Musical Theatre on the American Operatic Stage,' which explores the increasing emergence of musicals on opera stages across America, highlighting a significant increase in the genre's programming by nearly 108 percent in recent years," Moniz said. "The research was incredibly well received. In addition, I have begun conversations with two publishers, with the hope of publishing a book in the very near future."

Additionally, Moniz was recently chosen as one of the University of Miami's 30 under 30. Dr. Moniz holds the D.M. in Voice Performance from Florida State University, an M.M. in Vocal Performance from the Frost School of Music at the University of Miami, a B.M. in Vocal Performance from the Crane School of Music, and a B.A. in Speech Communication and Rhetoric from SUNY Potsdam, where he was recently selected as the recipient of the Rising Star Award for having demonstrated outstanding professional achievement in the first decade following graduation. He is a proud member of the American Guild of Musical Artists, Actors' Equity Association, National Association for Teachers of Singing, and the National Opera Association.