Physics, Mathematics double major honored for excelling in the classroom and community

Physics, Mathematics double major honored for excelling in the classroom and community

Each fall, an outstanding senior from each of the four-year degree-granting institutions of higher learning in Illinois is awarded the Abraham Lincoln Civic Engagement Award and thereby becomes a Student Laureate of the Lincoln Academy of Illinois. In the spirit of Lincoln, student laureates are honored for their leadership and service in the pursuit of the betterment of humanity and for overall excellence in curricular and extracurricular activities.

The virtual ceremony on Nov. 10 featured a congratulatory statement by Illinois Governor J.B. Pritzker, president of the Lincoln Academy. Student Laureates received a letter and certificate of merit signed by Gov. Pritzker, a Lincoln medallion, a challenge coin and a $500 check from The Lincoln Academy.

"When I learned that I was named Millikin's Lincoln Laureate for 2020, I was thankful for the award," said Craig. 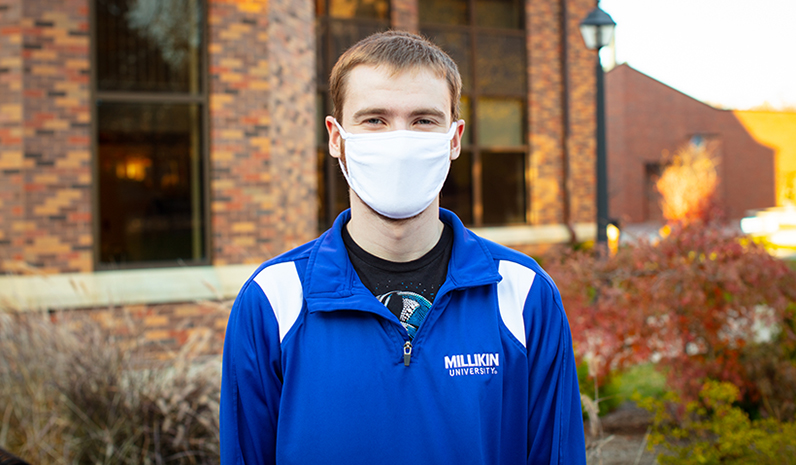 An Honors student and a Leighty Science Scholar, Craig has excelled in his classes while also working as a campus tutor and an astronomy lab assistant. Working alongside Dr. Casey Watson, professor and chair of the Department of Physics and Astronomy at Millikin, he conducted dark matter research beginning his first semester. More recently, Craig worked on projects with two other professors at Millikin: Dr. Mahua Biswas [physics] on nanoparticle fabrication research, and Dr. Paris Barnes [chemistry] to test a novel process to convert carbon dioxide into ethanol.

Additionally, Craig completed a summer 2019 internship at Argonne National Lab, a multidisciplinary science and engineering research center, on the study of supernovae for the Dark Energy Survey. As a result of his research, he has been a co-author on five poster presentations at national meetings, two each at the April 2018 and April 2019 American Physical Society (APS) Meetings, and a virtual poster at the April 2020 APS Meeting.

"As remarkable as Justin's intellect is, his drive to help others is greater still," Watson said. "That combination of traits is rare in my experience, and part of what makes him so special."

Craig's leadership extends beyond the classroom to a variety of campus and community outreach activities. He has served as president of Millikin's Society of Physics Students (SPS) Chapter for two years and as the student assistant for Millikin's Requarth Observatory, the largest publicly available telescope in Illinois located on the fifth and sixth floors of Leighty-Tabor Science Center. Craig served as the primary host of Millikin's weekly Public Observation Nights program in the Requarth Observatory for three years. Public Observation Nights have provided thousands of people on Millikin's campus and in the surrounding Decatur [Ill.] community with access to some of the best astronomical equipment in the state.

Additionally, Craig serves the broader SPS Community as an associate zone councilor for the multi-state Zone 8, as a member of the SPS National Council Outreach Committee and as co-chair of the SPS National Membership Committee. He has also served as a volunteer in the Decatur Memorial Hospital Emergency Room since 2018.

Craig says his passion for physics started with doing puzzles.

"Each physics problem is treated like a puzzle that can be solved," he said. "As part of the physics program at Millikin, physics majors are required to take a good portion of the mathematics program, so I decided, 'why not?' and committed to finishing the mathematics major. Certainly, like physics, math is not only about solving puzzles but to develop strategies to solve problems."

Craig added, "I decided to engage in minors in chemistry and computer science because in STEM there is a lot of intersection between subjects. So, I wanted to be as well rounded as I can. Also, a lot of research in STEM has adopted the use of computers for data analysis and computation, so pursuing a minor in computer science is fundamental if I were to develop my career around research."

Craig praises his Millikin professors for always being encouraging and sharing opportunities outside of Millikin. "They have also taken an interest in me and my work, so I am grateful for them," he said. "I am thankful for my professors who have been patient and flexible to allow me to put myself in the position of graduating a semester early."

Craig will graduate with a Bachelor of Science in Physics and Mathematics from Millikin in Dec. 2020.