Returning to competition in January of 2021, the Millikin University Women's basketball team recorded one of its most successful seasons in recent memory by winning the 2021 College Conference of Illinois & Wisconsin (CCIW) Women's Basketball Tournament Championship defeating Illinois Wesleyan 72-59. It was the first CCIW Tournament Championship for Millikin since 2005.

A big part of the Big Blue's success this past season was the play of first-year guard Elyce Knudsen. In March, Knudsen was named the CCIW Newcomer of the Year and was a unanimous All-Conference first team selection. Knudsen ranked as the third leading scorer in the CCIW, averaging 18.5 points per game. She scored 241 points on the season with 57 rebounds, 34 assists and 32 steals. Knudsen was named the CCIW Player of the Week twice during the season and scored 31 points in the CCIW Tournament championship game win over Illinois Wesleyan.

Now entering her sophomore year, the Philo, Ill., native is ready to take her game to the next level. 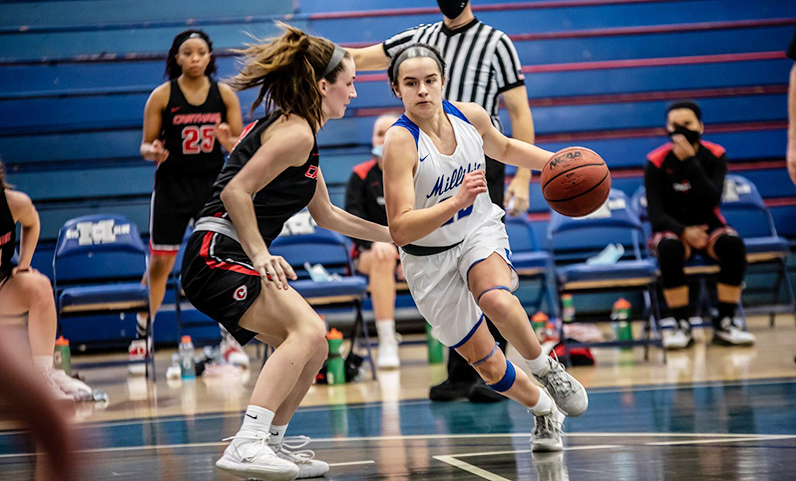 "There's just something about me. That I'm always wanting more," Knudsen said in a recent interview with WCIA-TV. "I want to compete at a high level, against some of the top players, and to do that I have to be working hard, and getting shots up, and making shots, and getting the most out of my time in the gym."

Knudsen has been spending her summer working out at the same gym where she became the Tolono Unity High School (Champaign County, Ill.) Girls' and Boys' All-Time leading scorer, breaking the previous mark of 1,812 points set by longtime NBA player Brian Cardinal.

"She loves Unity and her career there and what she was able to do there, but she definitely hasn't let up any," says Millikin head coach Olivia Lett. "I think she has a chance now to be a four or five-time All-American depending if she wants to use that extra year."

The Big Blue's season came to a close with the NCAA electing not to have a national tournament for Division III basketball due to COVID-19.

"Seeing Division-I and Division-II getting to compete at the national level was a bit heartbreaking," says Knudsen. "But that just puts a fire under me – to make myself better for my teammates next season."

While playing at Tolono Unity, Knudsen averaged 24.9 points per game as a senior and was named to the Associated Press Class First Team All-State.