The award is named after former College Conference of Illinois & Wisconsin (CCIW) Commissioner Chris Martin, who served in this role from 2002 to 2019. The CCIW Council of Presidents established the award in April 2019 to be presented annually to a student-athlete who demonstrates an unwavering commitment and perseverance to overcome a physical challenge in order to compete at the highest levels of CCIW athletics.

The award honors Martin's legacy of perseverance enduring the challenges of a lifelong hearing disability and a highly accomplished tenure leading the CCIW through a period of growth and success.

The CCIW's Senior Woman Administrators chose Coulthard as this year's recipient following a review of candidates. 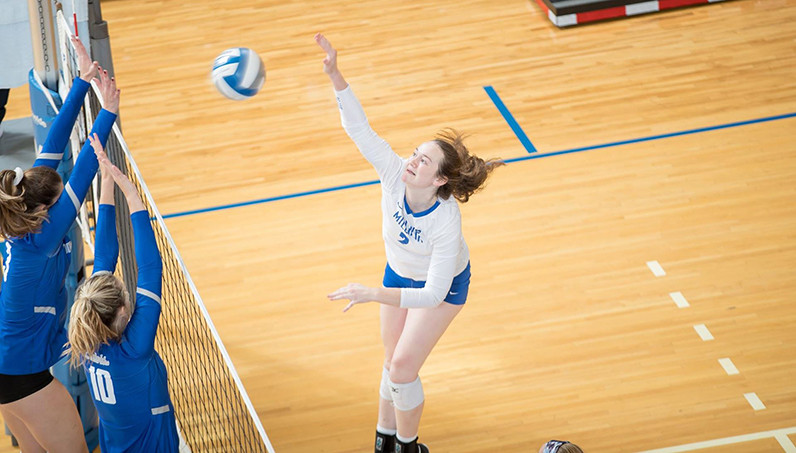 Coulthard, a four-year letter winner on the Millikin women's volleyball team, started multiple times for the Big Blue as a freshman and sophomore but began suffering health problems following her sophomore season.

Originally, a mild case of asthma, Coulthard had reoccurring Pneumonia and difficulty breathing. An X-ray showed a spot on her lung and despite numerous treatment plans, the spot had not cleared up.

She stayed committed to her team and managed to play in seven matches for Millikin in 2019 despite the persisting breathing difficulties. Coulthard worked with the Mayo Clinic in Minnesota to help get to the root of the persistent breathing problems. Her pulmonary specialists had never seen a patient of Coutlhard's age experiencing these issues.

Despite different levels of treatments, it's still a mystery as to what is causing her lung disorder. Currently, Coulthard has qualified for a study at the University of Washington and plans to work with them regarding her issue.

Coulthard participated for the Big Blue during her senior year this past spring, playing in four matches as she averaged 1.50 kills and 1.88 digs per set.