Millikin University senior Bradan Birt, of Epworth, Iowa, was named to the 2020-21 Academic All-America® Men's At-Large Second Team, selected by CoSIDA, recognizing the nation's top student-athletes for their combined performances on the field and in the classroom.

Birt is the first wrestler in school history to earn Academic All-America recognition and the 78th Millikin student-athlete to be selected for the prestigious program that honors academic and athletic excellence.

Birt, a sports management major, was the 2021 National Champion at 165 pounds at the National Wrestling Coaches Association (NWCA) DIII Coaches Association National Championships where he was named the event's Most Outstanding Wrestler. This season Birt won his fourth College Conference of Illinois and Wisconsin (CCIW) individual title and finished the season with a 15-0 record. Birt also excels in the classroom with a 3.58 cumulative grade point average. 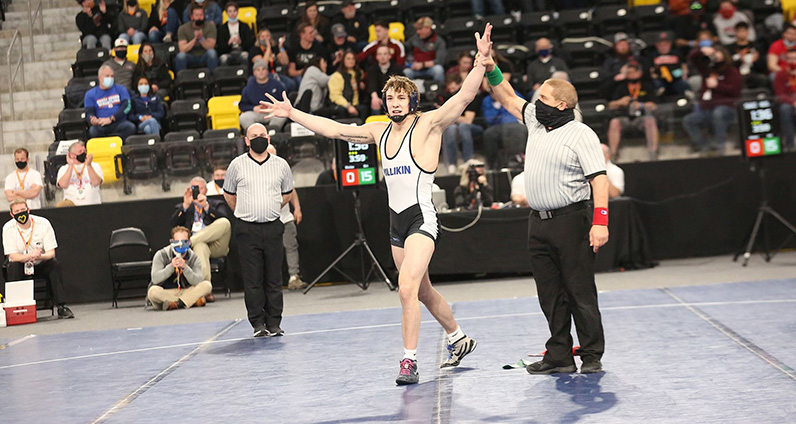 Birt has a career record of 118-13. He has earned NWCA All-American honors four times. In 2019, he finished second in the NCAA DIII Most Dominant Wrestler Rankings. He is a three-time CCIW Academic All-Conference honoree and a three-time NWCA Scholar All-American.

For more information on the Academic All-America® program, visit academicallamerica.com.

Big Blue Legacy passed from Mother to Daughter
Made it Millikin: Jensen Cearlock
Millikin professor shares excitement about the most...
Theatre design & production student stays ahead of the...
Student Profile: Gretchen Gould, Class of 2023