"What we do in wrestling is about control."

"What we do in wrestling is about control."

Millikin University wrestlers are helping make a difference in the local Decatur (Ill.) community by working with members of the Decatur Police Department and how the department approaches public safety.

On Oct. 5, members of the Big Blue wrestling program worked with police officers who are wanting to improve their ability to apprehend and control someone non-violently. In a recent interview with the Herald & Review, Millikin senior Bradan Birt, of Epworth, Iowa, says it's a great way to give back to the community.

"We are teaching basic takedowns and how to stay in a good position when there is someone fighting or someone resisting. We show them how to put themselves into positions to not get hurt and how to stay in control. That's what wrestling is all about — controlling the opponent," Birt said.

The session on Oct. 5 was the third time the wrestlers and officers had a chance to work together. Although the officers have martial arts experience, the wrestling techniques offer something different.

"What we do in wrestling is about control. I've seen before where people have said if the police had wrestling experience they could have taken down someone a lot easier," Millikin head wrestling coach Ryan Birt said. "Wrestling is more of a controlled sport and we have to keep everything legal. In a front head lock, we go to the chin, so you can't really say we were choking someone out. Wrestling lends itself to safety and body awareness, and techniques that are not so damaging." 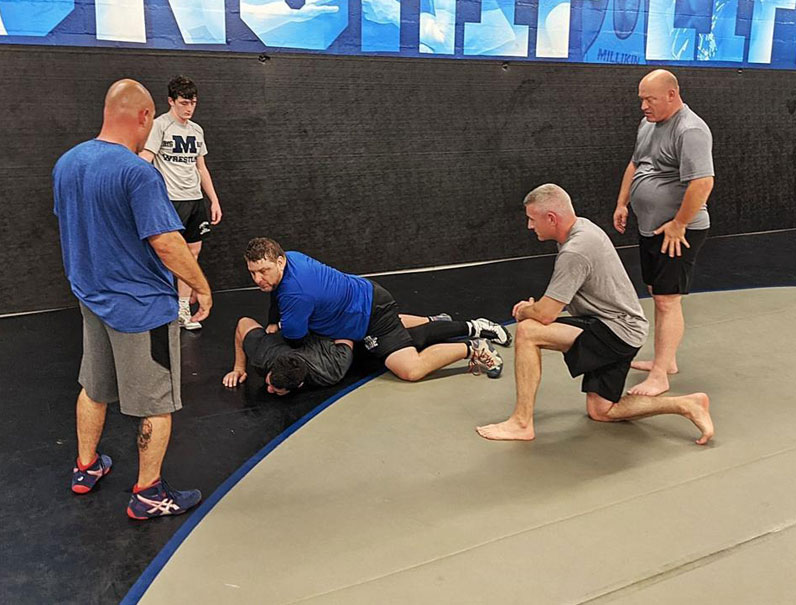 For Decatur officer Mike Donaker, who has been with the force for 23 years, he says the wrestling skills will become handy.

"It is the nature of the business that we use force. There is an expectation now that the public has with our use of force that is different than they had 20 years ago," Donaker said. "It is the public's expectation that we are going to effectively control somebody without doing serious harm to them. That is hard to do sometimes, but that is why we are doing something like this."

The wrestlers and officers are hoping to continue the sessions offering scenario training that is difficult to replicate in a real-world situation.

"We have rotated guys through, and we have different guys showing up each time because of work schedules and home life. We are trying to get as many officers through when we can. It has been great," Donaker said. "The repetitions and the intensity at which these guys go is something that we don't generally get to do. Getting these repetitions in at a high speed and a higher intensity in a controlled environment makes a big difference."

Since returning to competition in 2015, the Millikin wrestling program has been active in the Decatur community, regularly doing wrestling demonstrations at schools to promote the sport. For sophomore Dejon Glaster, of Murfreesboro, Tenn., the community outreach aspect served as a big factor on why he chose Millikin.

"This sort of thing is a big reason why I came here," Glaster said. "Coach Birt is really big on family and always looks out for everybody. It is what I love about Millikin."