Millikin University's chapter of The Honor Society of Phi Kappa Phi inducted 24 new members during an initiation ceremony on Feb. 23, 2020, in the University Commons on Millikin's campus.

The faculty and staff initiates included: 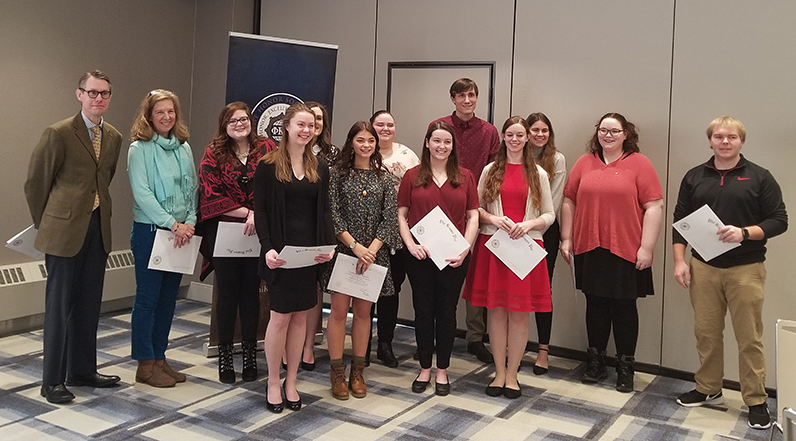 Phi Kappa Phi is the nation's oldest, largest and most selective all-discipline honor society. The Society's mission is to recognize and promote academic excellence in all fields of higher education and to engage the community of scholars in service to others. Its chapters are on more than 300 college and university campuses.

During the ceremony, chapter president Paul Lidy '02, dean of campus life, said, "Our mission states clearly who we are and what we do: to recognize and promote academic excellence in all fields of higher education and to engage the community of scholars in service to others."

Millikin's chapter of Phi Kappa Phi, established in 1950, invites the top students, as well as a limited number of faculty, staff and alumni to join the chapter each year.

To become a member of Phi Kappa Phi, senior undergraduates shall be in the upper 10 percent of their class in each college or division. Juniors are drawn from the upper 7.5 percent of their class. Graduate and professional students who have completed one full year of study and are in the upper 10 percent of all candidates for graduate or professional degrees are also eligible for membership. Faculty, administrators, professional staff and alumni who have achieved scholarly distinction, service and leadership also qualify for membership.

"Phi Kappa Phi's standards are unsurpassed and second to none," Lidy added. "We seek to reward excellence wherever it can be identified. We are pleased and proud of the initiates and what they have achieved."

Every two years the honor society as a whole gives away over more than $1 million to outstanding students, members and chapters. Those inducted into Phi Kappa Phi are qualified for annual grants and awards.