America's bald eagle population has soared back after the species nearly went extinct several decades ago. But these birds of prey are being threatened once again. Bird flu has killed dozens of bald eagles this year and new research indicates that lead poisoning is also killing the birds.

The Illinois Raptor Center, a 25-acre wildlife rehabilitation and education facility in Decatur, Ill., has admitted 38 bald eagles since 2018. Of those, 19 had unhealthy lead levels and eight died from lead poisoning.

In an interview with CBS Weekend News, Illinois Raptor Center Program Director Jacques Nuzzo said, "It's hard to see something so powerful and majestic become so weak and helpless."

Experts say suffering is largely preventable with studies showing a strong link between widespread lead poisoning in eagles and the use of lead ammunition by deer hunters. The ammunition fragments and disperses in a deer's body, and eagles ingest it when they feast on "gut piles," the internal organs that hunters remove and leave behind.

"There's just a little bit of lead in there from ammunition and that's where the eagles get it from," Nuzzo said.

Dr. Travis Wilcoxen, associate professor of biology and chair of the Biology Department at Millikin University, serves on the board of the Illinois Raptor Center. He and Nuzzo decided to start testing all of the birds that were brought in.

Over the past few years, Dr. Wilcoxen and students from Millikin's Biology Department have used research opportunities to better understand the health of birds of prey admitted to the Illinois Raptor Center. A Performance Learning Enhancement Grant also provided additional opportunities for students to gather new assessments, including the detection of lead poisoning and West Nile Virus infection in the birds.

"Some of the birds that started to catch our eye were birds that do not scavenge," Wilcoxen said. "These are birds who actively hunt live prey like cooper's hawk or western screech owl."

The Illinois Raptor Center began testing the birds bald eagles prey on, like pigeons and robins. Those birds also had a high level of lead in their systems. 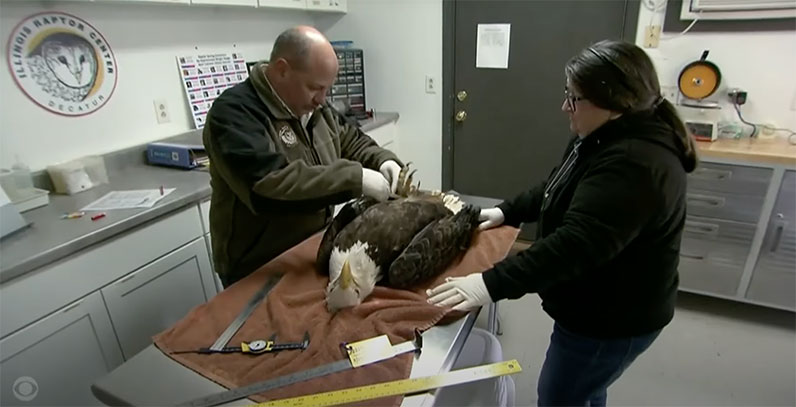 "To us, that said there is something in the environment that these birds are exposed to, likely in these urban settings, and we're probably exposed to that too," Wilcoxen said.

The lead poisoning issue gained attention back in Feb. 2022 when Science.org published a study of more than 1,200 eagles in 38 states that were tested for lead from 2010 to 2018. Almost half the eagles in the study had chronic lead poisoning.

The study also found that cases of recent lead poisoning rise in the winter, when eagles are most likely to be feeding on contaminated deer carcasses and gut piles.