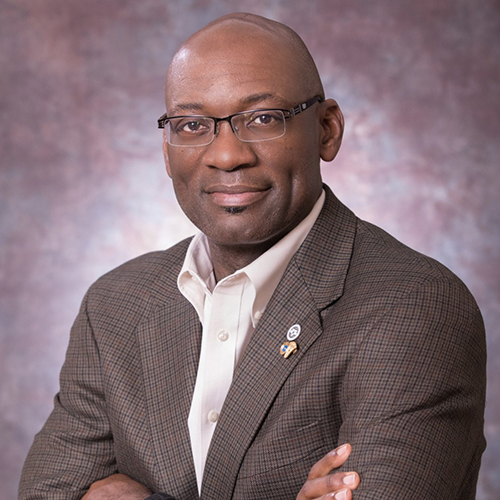 In celebration of Martin Luther King Jr. Day, Millikin University welcomes Dr. Willie Rockward, president of the National Society of Black Physicists (NSBP), for a public presentation on Monday, Jan. 21 at 3 p.m. in the Bob and Debi Johnston Banquet Room, located on the 3rd floor of the University Commons on Millikin's campus.

Dr. Rockward's presentation on Jan. 21 is part of Millikin University's Doug and Diane Oberhelman Leadership Impact Series. The title of his presentation is "Martin Luther King Jr., Albert Einstein, and You." The event is free and open to the public.

Dr. Rockward currently serves as professor of physics and chair of the Department of Physics & Dual Degree Engineering Program at Morgan State University. He also serves as the research director of the Materials and Optics Research & Engineering Laboratory.

Dr. Rockward has a unique combination of leadership from academic, professional and community experiences. Prior to Morgan State, Dr. Rockward served as a tenured professor of physics at Morehouse College as well as chair of the Department of Physics & Dual Degree Engineering Program (DDEP). He also served as the research director of the Materials and Optics Research & Engineering (MORE) Laboratory at Morehouse.

As chair of Physics & DDEP at Morehouse, his vision and leadership resulted in the department being the U.S. No. 1 producer for underrepresented minorities with Bachelor of Science degrees in Physics according to the American Institute of Physics in conjunction to boasting the Nation's most productive Dual Degree Engineering Program. He is a strong proponent of STEM mentorship using methodologies of faculty-to-student, peer-to-peer, professional shadowing, life-skills coaching, and research apprenticeship. His current research interests include micro/nano optics lithography, extreme ultraviolet interferometry, metamaterials, terahertz imaging, nanostructure characterization and crossed phase optics.

As president of the National Society of Black Physicists, Dr. Rockward oversees the largest and most recognizable organization devoted to promoting the professional well-being of African American physicists and physics students within the international scientific community and within society at large.

Dr. Rockward received a Bachelor of Science in Physics from Grambling State University. While completing his Master of Science in Physics from State University of New York at Albany, he transferred into the doctoral program in the School of Physics at the Georgia Institute of Technology (Georgia Tech). After completing his doctoral studies at Georgia Tech, he served as a civilian research physicist for the Advanced Guidance Division of the U.S. Air Force Research Laboratory located at Eglin Air Force Base in Florida.