Teams of filmmakers and animators were given a unique opportunity to create and exhibit their work at Millikin University's first "Images in Motion" film festival, presented by Millikin's Arts Technology Department. The film festival was held April 26 on Millikin's campus at Albert Taylor Theatre.

Any student, regardless of major, was able to enter original animation or video content in the film festival. Students had an opportunity to have their projects evaluated by industry professionals with prizes awarded in every category.

The festival started with a lecture by one of the guest judges, Pete Biagi, who is a cinematographer in residence at DePaul University. Biagi offered insight into his work as a full-time cinematographer and encouraged students to pursue the career, if that is their interest. 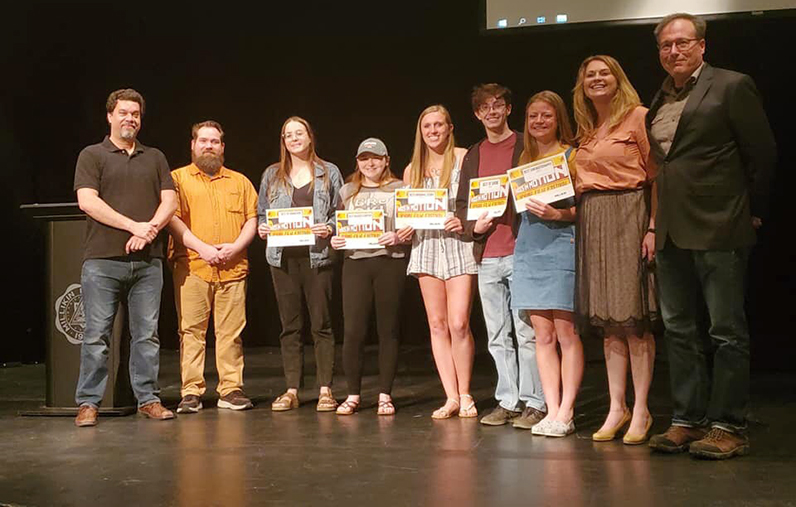 The second judge for the film festival was Dr. Ngozi Onuora, associate professor of education at Millikin. Dr. Onuora oversees the Blue Docs Rock Film Festival which is the culminating event for Millikin's honors seminar course on documentary filmmaking.

Jessa Wilcoxen, associate professor and chair of the arts technology department at Millikin, was impressed with the work that the students entered into the festival.

"I am very proud of what our students accomplished, especially since our video program is only two years old," Wilcoxen said. "Many of the entries were from first-year and sophomore students which is really exciting with the quality of work that they produced."

"Arts Technology incorporates many things and each student, no matter what the concentration, can dabble in all of it," Dadoly said in an interview with NowDecatur.com. "Originally, I wanted to edit films, and now that I have been making films I want to direct and come up with ideas for films."

After showcasing the entries, awards were presented for both animation and video.

Millikin University's Arts Technology Department prepares students to work in a variety of arts, business and entertainment industries. Students can a Bachelor of Arts or Bachelor of Science degree in the areas of audio engineering and production, interactive media, live event technology, video production and visual media.