Two years ago, Dr. Gail Fyke's son was successfully recovering from brain surgery at a New York area hospital, when inspiration struck ... an idea for a unique research project that is now helping people in the Decatur community.

Dr. Fyke’s son, Austin, went through many complementary therapies during the summer of 2020 as part of his surgical recovery process, including music therapy. After visiting the health care team in New York, Fyke took a trip on the subway and saw a poster with the words “Sing for Hope.”

The poster was promoting the Sing for Hope initiative — one of New York City’s largest public art projects, bringing artist-painted pianos to parks and public spaces of the city for public enjoyment each June. The Sing for Hope pianos are donated to schools, health care facilities and community centers, enriching lives for years to come. 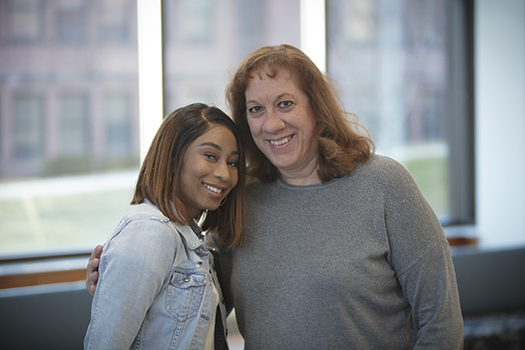 “I wanted to do that,” Fyke said. The assistant professor of nursing contacted Dr. Neal Smith, associate professor of music at Millikin, to help get her idea up and running. In the fall of 2020, the Public Painted Pianos Project in Macon County was officially launched.

As part of the project, local artists paint pianos that have been donated and Fyke finds places in the community to adopt the pianos for public use. Among the places was a local assisted living center in Decatur where Fyke, along with undergraduate fellows from the Millikin School of Nursing, are conducting research on the response to music and art therapy in senior citizens who have dementia.

“I received grant funding in August [2020] that helped the project pick up pace since things were slowed down due to COVID-19,” Fyke said. “When we put out the word for piano donations, we were overwhelmed with the response we received, especially from local artists in Macon County.”

During the research study, recent Millikin graduate Jessica Reynolds, who earned a Bachelor of Science in Nursing in 2020, helped collect data for Fyke from October to November. “Jessica would hold 15-minute sessions with the residents over the course of five weeks. Each resident is given five sessions to be shown the piano ... they are asked scripted questions, listen to two simple songs, and we record their responses and offer them a chance to touch the piano and see what it does,” Fyke said.

During the piano sessions, Reynolds was hoping to find a link to the residents’ past. “Sometimes they forget who they are, and to see them go to almost an emptiness and then be able to bring back life and enjoy the music is an incredible experience,” she says.

Reynolds worked at the facility prior to the project and had permission to work with the residents during COVID-19 restrictions. “I’ve been working with these people for six years, and they are amazing. It’s harder around the families than it is on us because we only know them in their dementia. I got a chance to see who they are now and I saw a glimpse of who they were,” she said.

Some of the songs that Reynolds would play for the residents were very recognizable tunes, including “Happy Birthday” and “Twinkle Twinkle Little Star.” “Just little songs that everybody will recognize and maybe trigger something in their minds,” Fyke said.

“The art was left up to the artists in terms of designs. I’m hoping the colors of the pianos will trigger the residents and spark their interest.” 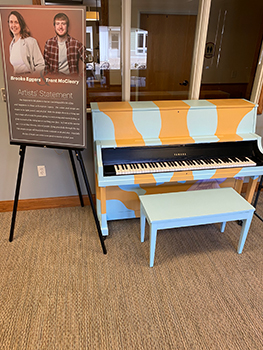 Helping to build on the project is senior nursing major Zakari Briggs, of Decatur, who took the baton as Fyke’s research assistant after Reynolds had graduated. Briggs is actively recruiting residents for the study and collecting data.

“Music is powerful. Music is something everybody loves and we are hoping this is something that can help the residents,” Briggs said. “It may be just touching the keys or being around others while the music is playing; it’s therapeutic for them.”

The connection with patients is the reason Briggs decided to become a nurse. “I think it makes all the stressful days so rewarding when you have that closeness with patients. Nursing requires resiliency and a passion for wanting to help others.”