Audrianna Bartholomew among 30 semifinalists chosen to compete in national competition

Audrianna Bartholomew among 30 semifinalists chosen to compete in national competition

Audrianna Bartholomew, of Pasadena, Calif., who recently earned a Bachelor of Arts in Musical Theatre from Millikin University in Dec. 2021, has been named a semifinalist in the 5th Annual NextGen National Competition: Finding the Voices of Tomorrow, presented by The American Pops Orchestra (APO).

The NextGen National Competition semifinal event will be shared with the public through a private broadcast on Saturday, Jan. 29, from 8-9 p.m. ET.

From hundreds of applicants, Bartholomew is among 30 semifinalists who were chosen to compete in the upcoming round on Jan. 29.

"I can't wait to compete in the semifinals of The American Pops Orchestra's 'NextGen National' competition alongside 29 other vocalists from across the country," Bartholomew said. "It's an honor to be a part of this prestigious event with incredible judges and I am so grateful for the support and knowledge I've gained during my time at Millikin." 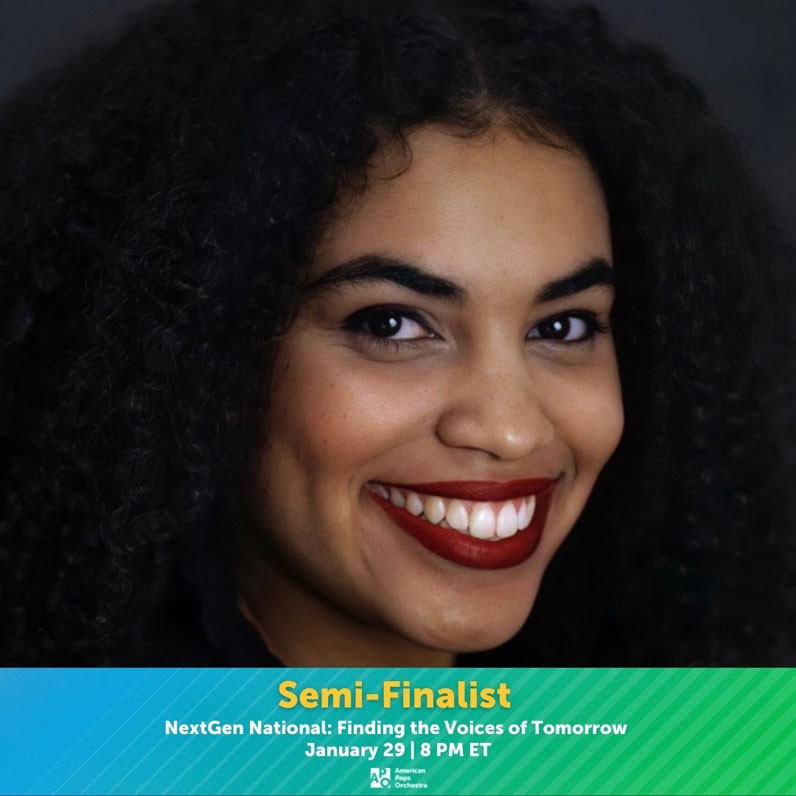 From the group of 30 semifinalists, 10 contestants will be selected to advance to the live final round in March 2022. The finalists will be chosen by a panel of judges and the virtual audience, who will receive a voting link following the Jan. 29 broadcast to support their favorite semifinalists. The judges are Broadway actress Aisha Jackson, U.S. Navy Band musician Cory Parker, Metropolitan Opera soprano Brittany Renee Robinson, and Broadway director and choreographer Tara Young.

The 5th Annual NextGen National Competition finalists will be announced on Sunday, Jan. 30.

No stranger to national singing competitions, Bartholomew was a contestant on NBC's "The Voice" back in Oct. 2018 following an impressive blind audition. During the blind audition episode, which aired on Oct. 1, 2018, Bartholomew landed a spot on Grammy Award-winner Jennifer Hudson's team. Bartholomew later invited Hudson onstage for an impromptu duet performance.

APO was founded in 2015 with a mission to breathe new life into orchestral pops programming and inspire diverse audiences to discover the wealth of the material in the Great American Songbook in dynamic new ways. Seeing an opportunity to challenge the status quo of the repertoire an orchestra performs, founder and Music Director, Luke Frazier, created The American Pops with the intent of breaking the mold of the traditional pops orchestra. This new, distinctly "American" orchestra brings together versatile musicians and reimagined programming focused around the Great American Songbook, and presents it with an approachable, fresh spin in order to engage diverse audiences. Through non-traditional orchestral settings, APO aims to deliver popular American classics to those who already know and love them, while also introducing these timeless pieces to younger generations in approachable settings.