The American Prize National Nonprofit Competitions in the Performing Arts is the nation's most comprehensive series of contests in the classical arts. The American Prize is nonprofit, unique in scope and structure, and is designed to evaluate, recognize, and reward the best performers, ensembles and composers in the United States based on submitted recordings.

For the Instrumental Performance competition, musicians were allowed to submit up to 20 minutes of music from recent performances.

"With so many respected musicians from around the country competing for The American Prize in Instrumental Performance each year, it's truly an honor to be selected as a second place winner in the 2021 competition," Cook said. "Since this was my first time entering this competition, I was also somewhat surprised by the outcome. It's very humbling to be selected as a winner; previous winners include musicians from the Detroit Symphony Orchestra, the West Point Band, and faculty members at the University of Maryland and the University of Cincinnati College-Conservatory of Music."

Brian Justison, director of the Millikin University School of Music noted, "David is an extraordinary talent and a consummate professional. This recognition simply adds further credence to the quality and integrity of his artistic output."

Cook submitted four selections for the competition spanning from the 19th century until now. His first selection was from Johannes Brahms's "Sonata in E-flat major, op. 120 no. 2 for clarinet and piano. "This is a quintessential piece from the Western classical repertoire for clarinet, known particularly for the intimate dialogue that occurs between the clarinet and piano. This performance comes from a guest artist recital I performed at Western Illinois University in 2019," Cook said.

Cook's second selection was from Garrett Gillingham's "Concerto for Clarinet and Wind Ensemble." He premiered the piece on March 1, 2020, with the Millikin University Symphonic Wind Ensemble (MSWE), conducted by Dr. Corey Seapy, assistant professor of music and director of bands at Millikin. "This piece is heavily influenced by the American barbershop harmony tradition: tuneful melodic writing, consonant harmonies, and Garrett wrote this piece specifically for the MSWE and I, and we were lucky to have him in residency with the ensemble leading up to the premiere performance."

The third piece Cook performed was a movement from Whitney George's "Unintentional Dances" for clarinet and piano. George wrote the piece for the Appian Duo, an ensemble composed of Cook and pianist Emily Grabinski Conklin, after Cook worked with George at a chamber music festival in Italy. 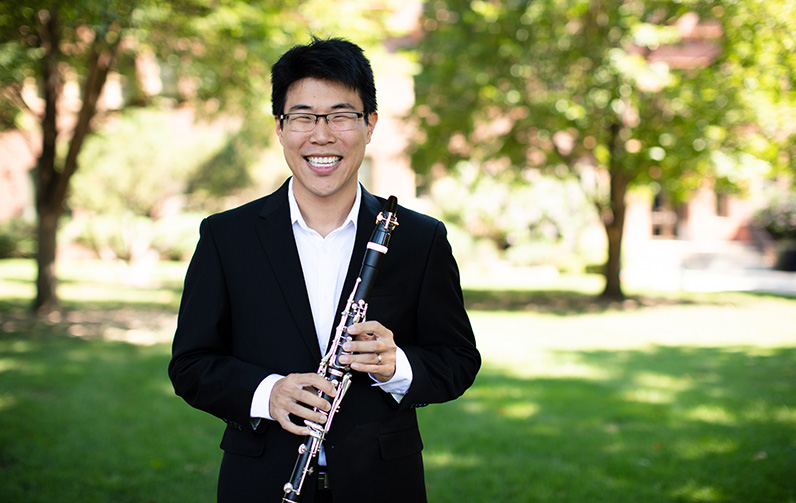 The final piece from Cook's portfolio was the "Prelude to Act III" from Giuseppe Verdi's opera "La forza del destino." "The prelude to the opera's third act includes a gorgeous clarinet solo accompanied by the orchestra – enough of a feature for the instrument to be commonly performed in recital by clarinet and piano. In this recording, I collaborated with Dr. Tatiana Shustova, adjunct professor of music at Millikin," Cook said.

David Cook currently serves as principal clarinet of the Millikin-Decatur Symphony Orchestra (MDSO) and clarinetist for the Appian Duo and the Greyline Duo. He was previously a member of the Wichita Symphony Orchestra, the Lawton Philharmonic Orchestra, Fiati Five and the Lieurance Woodwind Quintet. Past performances include ClarinetFest®, the College Music Society National Conference, the NACWPI Conference, the American Single Reed Summit and the Clarinet Colloquium at Texas A&M University-Commerce. His research has been published in The Clarinet, the NACWPI Journal and The Instrumentalist.

In October 2021, Cook will be performing at the College Music Society National Conference in Rochester, N.Y. – it will be his second time performing at the conference. He is also currently working on a book for Conway Publications about clarinet warm-ups, featuring contributions from prominent clarinetists around the United States and abroad.