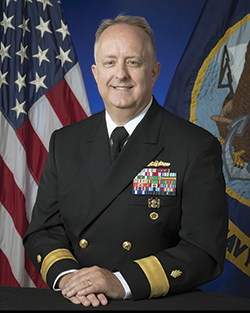 He was the first Expeditionary Medical Facility director “in theater” during Operation Iraqi Freedom, where he helped lead field hospitals coming online in Al-Nasiriyah, Iraq. He was the first Navy surgeon to be selected as U.S. Central Command surgeon. The first medical flag officer to be activated as deputy director of Chief of Naval Operations N44, which “plans, programs, budgets and executes the deployment of all Navy medical capabilities.” And the first Navy commanding officer of a NATO “Role Three” field hospital, providing injured soldiers access to much-needed specialty care.

During this role with NATO he was also “double hatted,” serving as the commander of Task Force Medical South, which was responsible for all health and supporting services across Southern Afghanistan during an influx of 35,000 U.S. troops as part of Operation Enduring Freedom. This included establishing blood-banking capabilities, medical logistics support capabilities and immediate resuscitative surgical care for combat casualties.

“If anything I was groomed for in my entire career, it was that position. Because all of the other jobs — trauma anesthesiologist, resuscitologist, educator, leader — all brought me to a pinnacle, a point which was perfect for that job.”

Via, who currently serves as commander of Naval Medical Forces Atlantic and the senior market manager of the Tidewater Military Health System, was also deployed during 9/11 as part of the “critical core,” providing respite for first responders and firefighters who worked at ground zero. And this list of accomplishments only scratches the surface of a comprehensive, continuing record of service.

Ironically though, in a life of firsts, Via found his first choice for his undergraduate degree lacking:

“I actually started out at the University of Illinois. There, my Chemistry 101 class had over a thousand people, and you would actually get lectured by videotape. And you had a TA [teaching assistant] in your room. And you took a test in an auditorium of 300 of your closest friends. And it’s just not the kind of person I am — I grew up in a small town just southeast of Decatur. So I transferred to Millikin.”

At Millikin, Via excelled in the James Millikin Scholars Program, where he found faculty who brought their passion for research into the classroom. He remembers Dr. Norman Jensen, head of the Biology Department, “for all the sage guidance and talks we had.”

“He was a consummate professor, a great individual and also served a lot through mentoring for those of us looking for pre- professional work.” 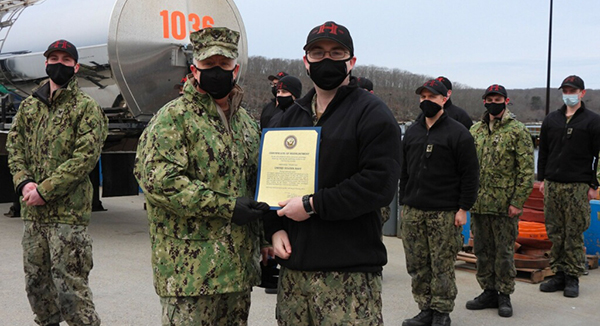 Dr. Neil Baird, who taught anatomy courses at the time, and Dr. Clarence Josefson, who taught an array of Via’s chemistry courses, were also key mentors. And there was a fourth, a professor who enriched Via’s interests in science — but by way of the humanities.

“I think one of the great things about Millikin, which actually we encourage for our kids, is the value of a liberal arts degree versus a hard science degree. Learning more than the sciences, that was where my focus was as a James Millikin Scholar ... [and English professor] Dr. Dan Guillory, who we affectionately called ‘Dr. Dan the Renaissance Man,’ he just seemed to know everything about everything. And he was one of those you admired and looked at and kind of thought, ‘Wow, I wish I could be that intellectual when it comes to knowledge and an understanding of the world around us.’”

Between his sophomore and junior years at Millikin, Via enlisted in the Navy Reserves, not only to help pay his college expenses but because of what he calls “an appreciation for service.” The following year, he read an article in the Navy’s All Hands magazine that introduced him to Uniformed Services University. There he saw the “perfect spot” to pursue his post- graduation interests in science, medicine and the military.

“You know, you show up to the Uniformed Services University, and your classmate to the right of you just got their master’s degree from Harvard. And you’re wondering, ‘Hmm, do I belong here or not?’ Ironically, you start doing your first sets of tests and getting 99’s and 100’s on the anatomy quizzes for dissections — you learn really quickly that the education at Millikin was top-notch, and that the professors did a great job.”

Looking back on his career, and the path that’s taken him from Millikin transfer student to United States Navy Rear Admiral, Via has advice for the current generation of Millikin students. Part of that advice is the importance of maintaining a work-life balance, which he does with the help of his wife, Terri Freeman Via, Class of 1989. The other is to be open to the unexpected path your career may take.

“There’s no one path. And I think, particularly for the driven undergraduate student, it is: ‘I am going to do X, and if I don’t get this, I’m not a success, and what am I going to do?’ [But] there is no one path to be successful in life. And the education [at Millikin] will set you up to accomplish many things. While you may or may not achieve what you thought was the intended target at the beginning, I guarantee you that life’s journey will take you a long ways.

“And don’t forget, [my career path] is representative of all the people I’ve been privileged to work with, who have done so much for me throughout time. None of us get here alone.”

When asked about a “day in the life” of a rear admiral, the discussion quickly turns to the U.S. government’s work in combating the spread of COVID-19.

“COVID obviously is a big impact. At 18 different locations, from the Mississippi River all the way to the Middle East in Bahrain, [we are] ensuring that clinics have the ability to do COVID testing on our sailors. ... [W]ith the COVID vaccine rollout, we are vaccinating at all of those sites and many branch clinics, so you can even add to that number significantly. Basically vaccinating both sailors and Marines on the Navy side and then beneficiaries to support not only DOD [Department of Defense] but all of those that have served and worn the cloth of our nation previously — making sure they’re vaccinated and taken care of is a big portion of what we do.”