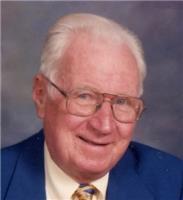 Peter Joseph Sandknop, 90, of Louisville, formerly of Radcliff, passed away Wednesday, Aug. 1, 2018, surrounded by his loved ones.

At his death, Mr. Sandknop was a member of St. Patrick's Parish. He was born in 1928, in LaBelle, Missouri, the son of Peter and Myrtle Sandknop, but grew up in St. Louis. After graduation from high school, he joined the U.S. Navy and served for two years leaving the service with an honorable discharge. He attended college and graduated from Millikin University in 1952. Upon graduation, he joined the W.T. Grant Co. and was a store manager for 23 years until the company went out of business. He is a former owner of Gateway Motel and Restaurant and former part owner of Best Western Gold Vault Inn.

Mr. Sandknop helped start the Radcliff tourism board serving as treasurer and president. He was also former president of AUSA. Mr. Sandknop was a member of Lions Club, Rotary Club, Knights of Columbus and member of the American Legion Post No. 113. He was commissioned a Kentucky Colonel in 1969. He and his wife were members of St. Christopher Catholic Church in Radcliff for 45 years.

He was preceded in death by a daughter, Patricia Sandknop; and a grandson, Chad Sandknop.

A Mass of Christian burial is at 10 a.m. Monday, Aug. 6, at St. Christopher Catholic Church in Radcliff with the Rev. Jeffery Hopper officiating. Burial follows in St. Patrick Cemetery on Fort Knox.

Visitation is from 4 to 7 p.m. Sunday and continues at 9 a.m. Monday at Nelson-Edelen-Bennett Funeral Home in Radcliff. A prayer service is at 5 p.m. Sunday.

Expressions of sympathy may take the form of contributions to St. Christopher Catholic Church in Radcliff.

Condolences may be expressed at www.nebfh.com.