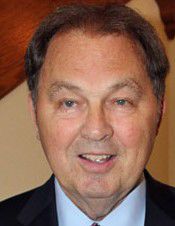 There will be a Memorial Service on Saturday, March 9, 2019 at 11:00 a.m. at Presbyterian Church of Barrington, 6 Brinker Rd, Barrington, with a reception following in the Fellowship Hall of the church.

A Celebration of Life Service will be held at 3:30 p.m. Saturday, April 13, 2019 at the Arcola Presbyterian Church, 311 E. Jefferson Street, with Rev. Donald Winch officiating. Following this service, there will be gathering at Kaskaskia County Club, Arcola, from 5:00-7:00 p.m. to celebrate and share memories of a life well lived. Shrader Funeral Home, Arcola, is assisting the family with local arrangements.

Dean was born June 9, 1938 in Coles County, the son of Victor and Dorothy Wright Sanders. He married Shirley McCann on July 4, 1958; they celebrated over 60 years of marriage.

He is survived by his wife, Shirley Sanders of Barrington; son, Terry Sanders of Glenview; brother, Duane (Shirley) Sanders of Colorado Springs, Colorado; sister, Joan Johnston of Decatur; and his dog, Fergie.

Dean was a graduate of Arcola High School Class of 1956, where he was an outstanding athlete in football, basketball, and track. He first attended Millikin University and then transferred to Eastern Illinois University earning a master’s degree in 1965. Later, Dean continued his education receiving his PH.D. degree at Northwestern.

Dean was a teacher, coach, and administrator for many years. His first was position was in Atwood, then Arcola, and then Barrington school system. Dean’s final job in education was Superintendent of Schools for Benton Harbor.

Pursuing another career, in 1977, Dean, Shirley, and Terry bought a small beer distribution business in Benton Harbor, Michigan. The Sanders family grew this business into a very successful operation and retired in 2008.

Online condolences to the family may be sent to www.hilligossshraderfh.com.