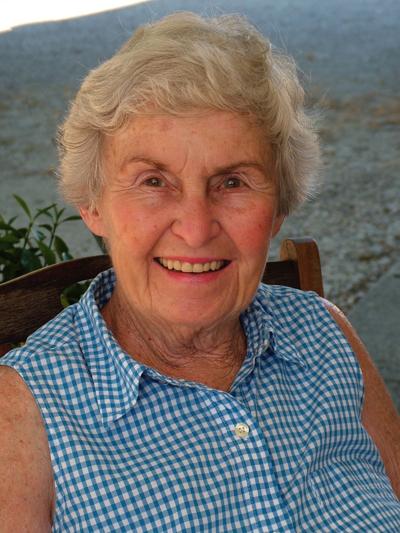 A service for family and friends will be held on December 21 at 12:00 noon at Our Lady of Hope Catholic Church in Sterling, Virginia. A celebration of life will follow at 3:00 PM at the Potomac Green Clubhouse. She will be buried at a private ceremony next to her husband, Thomas W. Palmer.

Martha Palmer was born on January 21, 1932, in Decatur, Illinois to Dr. Emmitt Joseph and Ruth (“Ruthie”) Ann McGowan. Martha graduated from Douglas MacArthur High School and attended Colorado College and became a life-long member of Kappa Alpha Theta before graduating from Millikin University in Decatur, Illinois with a degree in Education.

After graduation, Martha taught elementary and secondary children at the Oakland School in Decatur Illinois before meeting Thomas W. Palmer in 1953. They were married in September, 1956 and remained in Decatur, where their first daughter Jane Elizabeth was born. Martha and Tom moved to Chagrin Falls, Ohio in 1964 where her daughter Julie Ann and son James Thomas were born.

The family relocated to Scottsbluff Nebraska in 1971 where Martha and Tom founded Irrigation Specialties and Palmer Engineering in Terrytown, Nebraska, and later Gering, Nebraska where they worked together for over 35 years. In addition, Martha operated the “Valley Exchange, a store for handcrafted consignments on Main Street in Scottsbluff for many years.

After selling their business and land to Nebraska residents, they moved to Ashburn Virginia. During retirement, they enjoyed many continental and overseas travel adventures to Scotland, Ireland, Italy, Spain, France and Canada. Martha and Tom were fond of blooming flowers and converted much of their Ashburn green space into beds of flowering plants. They adopted two beloved Golden Retrievers who both enjoyed a happy life of pampered obedience. During her time in Nebraska and continuing after she moved to Virginia, she remained involved with the Scottsbluff Ladies Investment Club (SLIC).

After Tom’s passing December 26, 2012 in Palm Desert, CA, an annual destination for them both for over 20 years, Martha continued to travel. While she made treks to Hawaii, France, Costa Rica, Brazil, Switzerland accompanied by one of her daughters, she also made many solo ventures back to Scottsbluff to visit her favorite sites and friends. Between trips she was entertained by grandchildren Zoe and Jaxon, children of her son James and daughter-in-law Britt (Schmoyer) Palmer.

Martha was an advocate and participant of regular exercise and promoted the virtue by example. At 83, she was awarded a lifetime membership to the Scottsbluff Family YMCA as a tribute to her example of healthy living. Bravely, at 86, she fought lung and brain cancer with a positive, disciplined attitude, but for a regular dose of diet Coke from McDonalds.

In lieu of flowers, the family asks that a donation be made to the Golden Retriever Rescue, Education and Training (GRREAT, Merrifield Virginia) or the Panhandle Humane Society (Scottsbluff, Nebraska).

Martha’s passport of life was full of stamps of many of life’s adventures, challenges and successes. Married for more than 50 years, she led a loyal, principled, decisive, compassionate, charitable, frugal and healthy life.