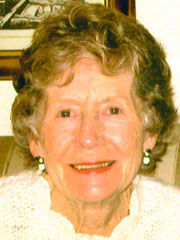 Jo Ann (Laws) Noland, 89, Decatur, Ill. passed away on February 1, 2017. An Extended Family Private Service will be held in the Blue Chapel of Westminster Presbyterian Church, Decatur, on Saturday, February 4th, at 10 a.m. Interment will be at a later date at Graceland Cemetery. Memorials may be made to Macon resources, Inc., 2121 Hubbard Ave., Decatur, IL, 62526. Brintlinger and Earl Funeral Home is assisting the family with arrangements.

Jo Ann Laws was born August 25, 1927 in Donnellson to Joel and Esther Laws. She was a graduate of Millikin University where she met and married John A. Noland on August 21, 1949. Prior to the birth of their three children, Jo Ann was the buyer and manager of Bachrach's boys' department and a partner in JoAnn's Maternities. She was a 61 year member of Westminster Presbyterian Church. Jo Ann is survived by her husband John; children, Sally (Cal) Masear of Morton, Jan (Paul) Schluter of Minneapolis, Minn., four grandchildren, Josef, John, Sidney and Leo, sister Marilyn Parkinson and brother-in-law Gene Gray. She was preceded in death by her parents, son, Tommy and sister, Sarah Gray.