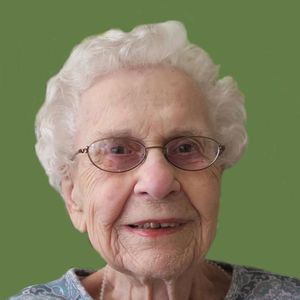 With a family that included an older brother Harold and younger brother Paul, Marian moved across central Illinois, with homes in Danville, Urbana, and Decatur. She graduated from Stephen Decatur High School and was able to attend Millikin University, where she met Frank S. Newell, jr., of Maywood, IL. They married on September 5, 1942.

Marian joined Frank in Florida, where he served at Ft. MacDill AFB, Tampa, in Celestial Navigation Training (CNT). The Newells would enjoy their Army friendships with annual CNT reunions for decades to come. They began their family in 1943 with the arrival of Robert Steven ("Steve"). After the War the family moved to Maywood, and grew to include David Paul (1946) and Janet Frances (1949). When Commonwealth Edison spun off Northern Illinois Gas Co., the Newell family moved to Aurora.

Throughout their lifetime together, the couple involved themselves in the community. They became members of New England Congregational Church and were avid duplicate & contract bridge players supporting the Elks and other clubs. They contributed regularly to Aurora University, Garfield Farm Museum, and Wayside Cross of Aurora.

Marian transferred her membership in the P.E.O. Sisterhood from Chapter GN Maywood, where she was a charter member, to Chapter BT Aurora, in which she developed many close friendships. She also supported Midwest Early American Pressed Glass Club, Woman's Club of Aurora, and Daughters of the American Revolution.

As a regular player in Aurora's Wednesday bridge games at the Prisco Center, Marian became owner of the club and served as director from the mid-'90s to mid-'00s. When not playing bridge, she took pleasure in sewing, knitting, leather-tooling, basket-weaving, and learning computer skills. She was an avid reader throughout her lifetime.

Marian's love of family and history led to researching Newell and Jeter genealogy; she published a book on several lines of Frank's and her children's ancestors. Travels across the U.S., around the British Isles, to Japan and China, further enhanced her understandings both of past and current times. She encouraged her children to travel also, and to pursue lifelong opportunities to learn.

The importance she felt for education was manifested through encouragement of her children, grandchildren, and great-grandchildren in their studies; she took great pride in her children each earning multiple post-collegiate degrees. When Frank passed in 2000, Marian established the Frank & Marian Newell Endowment Fund Scholarship with the Community Foundation, now of Fox Valley. This scholarship has already supported many Aurora teens in their college careers.

In 2008, Marian moved to the Wyndemere senior living center in Wheaton, where she became involved in their bridge groups and Investor Club. She continued her affiliation with P.E.O. with local Wheaton chapters and encouraged gatherings of P.E.O. residents within the Wyndemere-Westbridge campus. Her biggest ordeals were suffering the sudden passing of her son Steve in 2011, and coping with diminished eyesight and hearing.

What remained most important to Marian throughout her full life was her love and joyful support for friends and, above all, her family.

Memorials to the Frank & Marian Newell Scholarship Endowment Fund administered by the Community Foundation of the Fox River Valley, New England Congregational Church of Aurora, or P.E.O. International Sisterhood would be deeply appreciated.