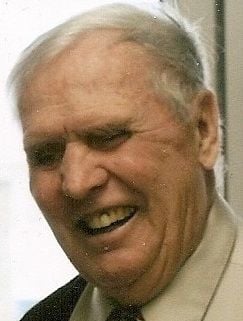 DECATUR -- Robert Ward Miller, 89, of rural Decatur passed away on December 7, 2018 at Hickory Point Christian Village in Forsyth. He was born in Macon County on August 18, 1929, the son of Merle Ralph and Ethel Mae Ward Miller.

He was married to Elizabeth (Libby) Lou Cochran in Robinson, IL on November 20, 1955. He graduated from Stephen Decatur High School in 1946, attended Millikin University and graduated from the University of Illinois in 1951. In 1951, Bob was inducted into the Army and was sent to Korea. After returning, he managed his family farm until a farm accident in 1995 left him blind. He attended the VA Hines School for the Blind in Maywood, IL. Bob set an example for others by remaining active, playing golf and hunting.

Bob was a member of Zion Chapel United Methodist Church, a trustee for Blue Mound Township, a member of the Macon County Farm Bureau and the Prime Timers, and Tau Kappa Epsilon. He was a 4-H leader for many years.

He is survived by his wife, children Roger Miller and wife Rachel of Boody, Kerry Halter and husband Joe of Glen Ellyn, and Steve Miller and wife Georgeann of Cleveland, OH. Grandchildren are Ryan Miller and wife Alexandre Wagner, Benjamin Miller and wife Heather Eaton, Erin Halter, Grant Halter, Nathan Miller, and Nicholas Miller. Preceding him in death were his parents, grandparents, and sister Shirley Billings.

Seitz Funeral Home, Moweaqua has been entrusted with the care and service arrangements. Condolences for the family may be left at www.seitzfh.com.