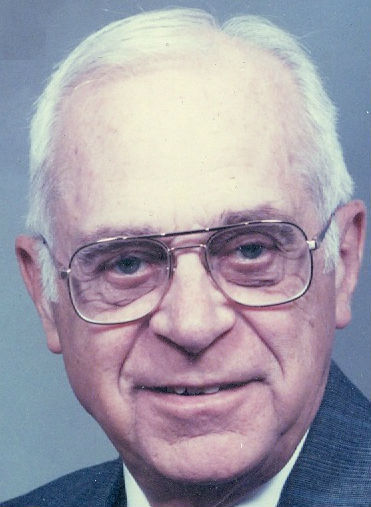 Bill grew up in the Bethlehem Presbyterian Church, and later was a member of the Westminster Presbyterian Church for 66 years where he had served as Deacon, Elder, and Trustee. He was a World War II veteran who served in the Army from 1942 to 1945 in Great Britain, France, and Africa. Bill graduated from Argenta-Oreana High School in 1936 as Class Valedictorian. He attended Brown's Business College and Millikin University, and he graduated from the University of Wisconsin School of Banking. He worked as a banker for 46 years retiring in 1983. Working only for the Millikin National Bank and its successor the Magna Bank, he served in many positions ending as vice president and cashier of the bank. Also Bill was a director on the Board of The Gerber State Bank from 1972 to 1999, serving on the executive, loan, and trust committees. He was a long time member of Noon Sertoma Club and the Warrensburg Masonic Lodge. Bill was on the Visiting Nurses Board of Directors and past treasurer of the Anna B. Millikin Home. Bill was a former member of the Decatur Club and enjoyed Friday lunches with his friends. He bowled with the Millikin Bank and Sertoma Club teams, and he was the Herald and Review Singles Champion in 1942. In his younger years, Bill was a shortstop on the Millikin National Bank softball team, and he was a lifelong baseball and Cub fan. Golf was a hobby he took up later in life at which he always had a good time playing with Mom, family, and friends. He also liked gardening, especially growing popcorn. Mom and Dad enjoyed traveling on family vacations and trips with friends.

He was preceded in death by his parents, wife, brother Howard, great grandson Declan Thomas Johnson, and sister-in-law and brother-in-law Betty and Corwin Marsh.

We wish to acknowledge the late Dr. Richard Fritz and his staff for the care and compassion which they gave Dad all through the years. Also, a thank you to Imboden Creek Living Center and its staff and Decatur Memorial Hospital for their wonderful care through Dad's illness.

Condolences may be sent to the family at www.brintlingerandearl.com.