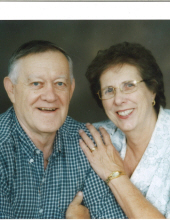 Roger Orval Gustin, passed away peacefully February 28th, 2016 at the age of 81 ending his long battle with Parkinson's Disease. He was surrounded by his immediate family.

Roger was born June 20th, 1934 in Sullivan, Illinois graduating H.S. Class of 1952, where he was a member of the H.S. band and lettered in basketball, baseball, football and track. Roger received his bachelor degree from Millikin University in Decatur, IL and then his Masters degree in Administration and teaching credential… from Eastern Illinois University in Charleston. In 1960, Roger moved to Madera, California and started teaching at Madera High School where he retired from in 1992. In 1963, Roger married Joan Cappelluti of Madera and were together for 47 years. She preceded him in death on November 25, 2010.

Roger is survived by his two sons, Mark and his wife Tammy of San Francisco, Bill of Madera, CA and grandson, Bradley of Fresno, CA.

Roger continued to maintain his strong ties to the Sullivan community his entire life. Therefore, In lieu of flowers, the family has requested donations to: The Little Theatre on the Square, PO Box 288 Sullivan, Illinois 61951 in his name.

Condolences may be offered to the family at www.mcmullinyoung.com.