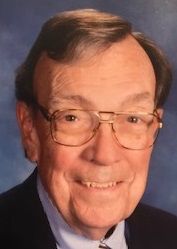 A mass of Christian Burial will be held 10 AM Saturday, December 22, 2018 at Holy Family Catholic Church. Visitation will be held one hour prior to funeral mass.

Jerry was born July 9, 1934 at St. Mary’s Hospital and raised in Argenta, IL. The son of Velma and Thelma (Walker) Groves. He graduated from Millikin University with a degree in business in 1956. He was a member of the Sigma Alpha Epsilon Fraternity. He began his career as a finance manager at Kilborn Motors in 1956 where he later became Vice President until it’s closing in 1980. He retired from Hazelrig Chrysler Plymouth and Bob Brady Honda. He was a past president of South Side Country Club., member of the Golden K and a long time member of the YMCA. Surviving are his wife of sixty years, Mary Ann Colbert Groves, daughter, Martha Levison (George) of Danville, CA, Elizabeth Wiegers (Phil) of Flower Mound, TX, Sarah Devereux (Joey) of Decatur, IL; grandchildren, Andrew Levison (Alyssa), Sam Levison, Ellen Devereux, Claire Wiegers, Rachel Devereux and Emma Grace Wiegers and two great grandchildren, Cooper and Davis Levison.

Jerry was preceded in death by his parents and one brother, Jack.

The family wishes to extend their gratitude to St. Mary’s Hospital, Fairhaven Christian Village and Hospice.

The Moran and Goebel Funeral Home has been entrusted with the care of Jerry. Condolences may be left to his family at www.moranandgoebel.com.